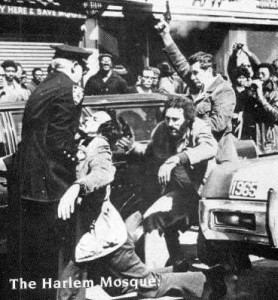 Surfing the Internet tonight looking for some information on NY Mosques, I came across this article about a brutal day at a Harlem Mosque back in 1972. Even after the murder of NYC Policeman, authority figures were still bowing to Islam.

April 14, 1972, was one of the darkest days in the NYPD history. Patrolmen Phil Cardillo and Vito Navarra were riding in 28 sector George. They were the first RMP to respond to a 10‑13 on the second floor at 102 West 116 Street.

After arriving and entering the building which was a mosque they questioned about 10 muslims at the front desk about the call. Suddenly the muslims shouted “Allah Akhbar”, more muslims came from rooms, then the officers were beaten and stomped by numerous black muslims.

A minute or two later Patrolmen Vic Padilla and Ivan Negron of the 25 pct. arrived and were also badly beaten and knocked to the ground. Navarra was able to crawl to the front door which was then slammed shut by the muslims. He told the responding cops that Cardillo was still inside. Thru a small window in the front door cops could see Cardillo on the floor being kicked by the surrounding mob. Padilla was down and being stomped and his gun was taken. Ptl. Negron was being beaten and he was fighting off numerous hands that were attempting to rip the gun from his holster.

One of the muslims, six foot four and 260 pounds, Louis 17X Dupree grabbed Cardillo’s gun, ripped it from the holster and fired a round into Cardillo. The cops at the front door smashed the glass and afraid of hitting the fallen cops, fired five rounds over the heads of the muslims. Padilla, seeing Louis Dupree running with the gun, fired three rounds. More 10‑13’s are called.

The cops broke in the front door. The seventeen muslims ran to the basement. Cops flooded through the door and chased the fleeing muslims down the stairs. The cops had them against the wall and began searching for the missing guns. Cardillo is removed to St. Lukes hospital. At the same time, outside the mosque a large crowd of about a thousand locals begin to riot.

Cars were overturned, bricks are coming off the roofs, and cops and media people are being assaulted. While this is going on Deputy Chief Inspector William Knapp arrived and went into the basement and spoke with Inspector John Haugh the 28 pct CO. Insp. Haugh had responded to the 10‑13. He told the cops to guard the prisoners.

Knapp called Commissioner Pat Murphy and advised him of the turmoil inside and outside the mosque. While Knapp was talking on the phone he heard shouting. He turned and saw Louis Farrakhan and Charlie Rangel leading a large group of muslims down the basement stairs. Farrakhan was shouting that all the cops must leave the temple. Knapp tells Haugh to move to the street.

Now Deputy Commissioner Ben Ward arrives, with Farrakhan at his side he shouts to the superior officers that the cops immediately leave the mosque. The crime scene was abandoned. Farrakhan and Rangel are shouting to the superior officers “If you stay, there is nothing we can do to protect you. You’ll be overrun. There’ll be rioting. People may be killed.” Farrakhan and Rangel ‘promise’ that the prisoners would come to the 24 pct. at five o’clock to be questioned. Do you think anyone showed up? Phil Cardillo died six days later. Mayor John Lindsay and Commissioner Pat Murphy did NOT attend the funeral.

A few days after Cardillo was buried. Deputy Commissioner Ben Ward was quoted in the Amsterdam news: I believe that my investigation has pointed out, at least to my satisfaction, that there were some errors made on the part of the police. For the errors, and for the consequence of those errors, I apologize to minister Farrakhan.”

The dhimmitude started along time ago. Will we ever learn…..

[…] reading HERE. Share this post!ShareTwitterDiggFacebookEmailStumbleUponPrintRedditLike this:LikeBe the first to […]

Thanks for pitching in!

Islam is the most evil and intolerant religion in the world. Never lost to islam.

So, prosecute now. There is no statute of limitations on murder.

Wow! This incident is something we never hear about.

Rangel and Farrakhan. And Bill Ayers, Obama’s mentor an ghostwrite, a terrorist. When will people wake up?

There have been quite a few since.

It figures that Louis Farrakhan and Charlie Rangel would somehow be in the middle of this disgusting display of mosque violence.

These are not temples, or churches or synagogues…they are battle staging areas.

I don’t understand.
Why was there so much aggression toward the police? Why did they go there in the first place? What is a 10-13?

A 10-13 is weather/road related information.

You need to read the Circle of Six…

It’s hard to believe that no-one was convicted for the murder of Cardillo! And from what was reported and seen by other officers, I would say that all “ten” mu-slimes should have been guilty of assaulting and beating of the police officers.

There is some peace in knowing that an indefinite hell is awaiting their souls arrival.

There would be much more peace in knowing that they were pulled out of their area of influence and maybe onto the electric chair.

Not much interested in a hypothetical, if infinite, hell somewhere – meanwhile they have had nearly 40 years of working mischief and brain washing children.

What I’d like to know is when Farrakhan and Rangel showed up on the scene and how they knew the incident was unfolding.

Linked on my site Chris. Good work as usual!

RD thanks for the info
Sad story – to hurt a policeman or anyone who serves the community is tantamount to treason the perpetrators should shot.

Sorry that should read be shot

The sad ending to this story is that not a single person was punished for this outrageous attack on the police. The “alleged” assassin, Louis 17X Dupree, was prosecuted but the first trial ended in a hung jury and the second trial ended with an acquital. It is now known that the FBI had informants in the mosque, but apparently that information was not revealed to the prosecution. Louis Farrakhan seemed to have orchestrated the entire caper. See:
http://articles.nydailynews.com/2009-04-05/news/17920825_1_mosque-justice-department-unsolved-murder

That is sad Chris, yet sadly not surprising.
http://www.facebook.com/l.php?u=http%3A%2F%2Fsurroundthemwithprayer.blogspot.com%2F2011%2F08%2Fislam-in-1972-we-should-have-learned.html&h=nAQCPEJl_AQC3Pkvark0nvsESfgIDgShGaYU23gk-Zn-VeA

Why does any African-American ever become Muslim? Muslims (Saudis) have taken over 50,000 black Africans as slaves (from the Sudan) in the last ten years.

Because in their minds, the taking of slaves by non-whites is not really slavery.
They really do not believe that they could ever suffer at the hands of other blacks or non-whites. They have forgotten that Africans betrayed other Africans to both slave trades, and that “one’s own people” are far more treacherous than most strangers ever dreamed of being.
Consequently, they deny prevalence of black on black or non-white on black crime constantly and they deny the existence of the Trans-Saharan, Indian Ocean slave trades.

There are also many historians who tell themselves the pretty lie that the Muslim slave trades were much less brutal than the Atlantic slave trade.
These people are being bought and sold in slave societies, societies in which the template for every relationship, between the individual and God, father and child, husband and wife, is drawn on that between slave and master.
Submission is always brought about through the infliction of pain.
All slavery is created by and maintained by violence.
These are very hard historically-derived truths and they are directly applicable to societies today.

Here is a recent story from Middle East Online about the Muslim slave trade, and the arrest and accusation of anti-slavery activists.
The anti-slavery people are, in Mauritanian law, the criminals.

America and the West go about their business and let this continue.
We should all, all be ashamed, because it’s as if those 620,000 died in vain.

Will we ever learn and wake up to what these folks are about? Thanks for the History lesson.

I thank you for the history lesson. Unfortunately, many African-Americans were not taught details of slave trade. I grew up on the west side of Chicago and attended school there and not once were any true details of what happened in AFRICA, as to who sold out whom and who profited from our capture there was given. For me, it wasn’t until I saw “Amistad” that I became aware of Muslim involvement in slave trade. Trust me, I was shocked. Deception has been the key to it’s raise in our community. It is only the truth one knows that will make and keep them free. Chris, thanks for all you’re doing.

When whites held slaves, they were brutal.
The Atlantic slave trade and slave systems were some of the most merciless the world has ever seen, particularly in the Caribbean and Brazil (where sugar was cultivated).
The Trans-Saharan Slave Trade, however, has existed since the 9th century and continues today.
When non-whites hold other non-whites as slaves, buy and sell them, rape them, brutalize or kill them, the world turns its back on it all. For some reason, if there are not the racializing factor and white people involved, the slavery becomes “respectable.”
But I think it’s wrong in every case.
And the countries of the world that have repudiated slavery are under a serious, unfulfilled, ethical obligation to fight slavery where it exists and that means confronting Islam and Muslims.
That means discrediting their laws, and their social structure.
Tall orders all of them.

This is so sad. One can only imagine how many such horrors must’ve transpired in the past centuries all across the globe – from Egypt’s Copts, to Syria’s Catholics, to Afghan’s Buddhists to Malaysia’s ethnic Malays.
.
It’s not even the tip of the iceberg, but rest assured, not even this small tip will be covered by the mainstream media or by any serious politician – not now, not in the next 50 years.
.
MN

Looking back, what a positive event had the police shot both Rangel, Farrakhan, and the seven foot douchebag.

The police and our government cave in to Islam constantly. What is it about this “peaceful religion” that intimidates law enforcement this way?
God help us!

Hey LW. Any chance of this getting onto the MSM? Especially with Farrakahn kind of back in the news.

I send all of my posts to a lot of the MSM. Seems they are afraid to touch it, but we have to keep trying!

Let us rid ourselves of this violent religion in the name of peace.

Read “Circle of Six” written by a former detective on the scene. While this article is great to open eyes about this incident, the book covers just how deep the betraytal by NYPD brass and NYC politicians this really was.

Them yelling “Allah Akbar” has nothing to do with race. The EXECUTION of the cop made is controversial. As for your claim of “shoddy research”. The article was written by the NYPD. No surprise you try to take Islam out of the equation. Your goal is here clear. But you have failed miserably.

For the record I do not ban people for disagreeing with me. I ban disrespectful game players like yourself. Save yourself some time. That was your last post here, enough time wasted with you. Now go dream about me.