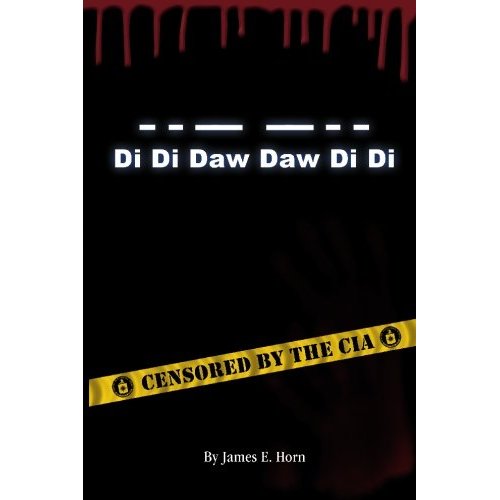 Di Di Daw Daw Di Di is an insightful realpolitik text by a retired Foreign Service Officer who has served in Moslem countries, worked as a Security Professional, and wore other hats during his 25-years of service abroad where he held the highest levels of TOP SECRET and intelligence security clearances. His vision is 20-20.

Prior to publication, Di Di Daw Daw Di Di was submitted to federal agencies for review and the text was censored (redacted) by the Central Intelligence Agency and the Department of State. This censored version retains 98% of its pre-redacted integrity and character.

Di Di Daw Daw Di Di explores the sneak attack committed by dedicated Moslems on 9/11/01 and their motivation, and frankly discusses the role of America’s ineffectual national security system and its dereliction which led to 9/11’s occurrence.

James E. Horn discusses failed CIA-FBI relationships and other interagency frictions detrimental to America‘s security; he explains why the Department of Homeland Security is designed to fail.

Horn clearly does not suffer fools gladly, and expects some of those fools to be terribly offended by this piece of contemporary literature. He urges them to seek guidance before exposing themselves to these fundamentals expressed in this book.

Horn delves deeply into Islam where Horn is highly knowledgeable and experienced having lived and worked in Moslem environments for over a decade where he studied Islam and experienced Islam in practice. Horn offers up a number of fundamental truths which will give readers serious cause for concern. Horn is not an Islamophobe but affirms that he is Islam-aware and thus Islam-averse.

While Horn offers no quarter to Islam, he is likewise unsympathetic and is even seriously critical of Christendom and other religions and civilizations who are failing their people, their citizens in dealing with the horrifically rapacious ideology of Islam. Horn predicts that readers of Di Di Daw Daw Di Di will be better informed, educated, wiser, and thus better prepared when dealing with Islam, as all Americans must be in confronting madness.

The following is a prediction. Let’s hope that I am wrong, or that
this, when it gets out there and is being discussed will cause Barak
Hussein Obama to back off on what I suspect is a diabolical plan to turn
Khalid Sheikh Mohammed (KSM) free. The trial of 9/11 mastermind,
Khalid Sheikh Mohammed and his co-conspirators is being carefully
orchestrated to follow a strategy to get him spun loose, to set him free,
to reward him for his role in murdering 3,000 innocents.

Regarding Fox News’ Bill O’Reilley:
……………..
— let the reader (or viewer) decide……… For example, Bill
O’Reilly is one of America’s greatest patriots and I believe,
one of the finest TV journalists in the world. I am often
thrilled by his no-nonsense dealings with exploitive, phony,
fraudulent, fetid, flotsam like Barney Franks who is one of
the most corrupt and nasty politicians in history. Clearly,
O’Reilley does not suffer fools gladly. Unfortunately, I also
believe that O’Reilley has been mugged or muzzled and is………….

For decades, thousands and thousands of Arab/Moslem men
have come to the United States (and other civilized countries) to attend
colleges and universities. They come to obtain educations not available
in their countries, and to learn and develop skills that they bring home
with them.

Some of these men discover that there is more to the world than
the crap where they’ve come from, and stay on illegally, or legally if they
can work it. Some of these men even become civilized and go on to live
rewarding lives that benefit everyone around them. They marry, have
children, and do wonderful and good things that civilized people do. I
applaud them.

Others get their technical educations, but genuine civilization
does not really rub off on them because they simply are willfully ignorant
and prone to do evil. They are usually moneyed, and can enjoy
themselves in many ways. Often, they meet, court, and capture the
hearts of western women, and marry them. Like married couples, they
have children. When these guys return to their home countries, they
bring their western trophy brides and children with them.

Of those trophy brides, half (or perhaps more) are treated to
indignations and even cruelties beyond imagination soon after they get
off of the plane. In Arab/Mohammedan countries, women have no
rights, and both they and their children are property of the
husband/father. They are chattel, to be used, even sold or given away.
The women and their children may not travel out of the country without
permission of the husband/father. Too often, after arriving in their new
homes, these foolish, tragic women learn that they are merely one of
their husbands’ wives, and are lesser ranking. They are treated poorly,
and are often compelled to become lowly servants to the senior wives,
and to the families of the husband. If they get angry and want to leave,
this may in some cases be allowed, but their children must remain.
How many responsible, civilized women will abandon their
children? Not many. So, they remain in awful situations just to remain
with and to try to protect their children.

I’ll agree that not all women are subjected to this. A few are
allowed to retain their dignity, but they are a minority.

To purchase a copy of this book go HERE.