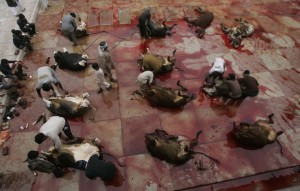 (Note: Image not taken from the Mosque, but this is what they are calling for.)

Although this Islamic errr….bloodfest of Qurbani took place last month, this video which comes from the Al-Farooq Mosque in Atlanta Georgia has to be exposed! In it Imam Mohammad Khalid, calls for Muslims to make a blood sacrifice to Allah in the name of Qurbani. But before we head to the video, here is a little background on this sick sacrifice to Allah.

‘Udhiya’ is an Arabic word meaning “blood sacrifice”, and ‘Qurbani’ is an Urdu and Persian word derived from the Arabic word “Qurban” which literally means an act performed to seek Allah’s pleasure. It is technically used for the sacrifice of an animal slaughtered for the sake of Allah.

Some “highlights” of the video are the following:

*Slaughtering an animal for the pleasure of Allah.

*This is a the “most desirable” act during those dates.

*Muslims have to follow the commands of Allah in every way possible.

*There is no act which a Muslim can do more desirable than shedding blood for Allah, slaughtering an animal for his sake.

Yes friends, this is happening in America and two years ago I exposed a restaurant in Jamaica Queens, that had used its basement to slaughter animals in the name of Allah!

WHO IS OBLIGED TO OFFER THE SACRIFICE?

‘Qurbani’ is ‘wajib’ (compulsory) according to Imam Abu Hanifah (and sunnat-e-muakkadah according to other Imams) upon every ‘mukeem’ (domiciled) and who possesses 613.35 grams of silver or its equivalent in money, personal ornaments, stock in trade or any other form of wealth which is surplus to his/her basic needs. Each adult member of a family who possesses that much wealth must perform his/her own ‘Qurbani’ separately.

That is just like the Imam stated. Husbands and wives must perform this sacrifice! Is this even legal in America? Is it legal to bring home a live animal, cut its throat and watch it die? Because this is happening in America, as Muslims are proudly selling livestock for just this reason! 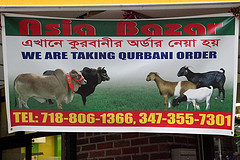 What if it is not done “properly”, what if the poor animal suffers for minutes, or even hours?

Searching online, I found the following information on a Florida Court case on animal sacrifice and religion.

Unfortunately this practice is found in the Koran.

And [as for] the sacrificial camels (al-budn, plural of badana, which are ‘camels’) — We have appointed them for you as one of God’s sacraments, the [ritual] ceremonies of His religion. There is good for you in them, benefit for you in this world, as already mentioned, and a reward in the Hereafter. So mention God’s Name over them, at the point of immolating them, when they are lined up, standing on three legs, with the left foreleg hobbled. Then, when their flanks have collapsed, fallen to the ground after immolation — which is the time when one may eat of them — eat of them, if you wish, and feed the [self-contained] beggar (al-qāni‘, [a beggar] who is content with what he is given, neither asking nor approaching [people]) and the suppliant (al-mu‘tarr, [a beggar] who asks [for charity] or approaches [people for that purpose]). So, that is, similar to such a disposal, We have disposed them for you, that it may be immolated or ridden — for otherwise it would not have been possible — that perhaps you might be thankful, for My graces to you.

If you have the stomach, watch and see what these animals (I do not mean the one that has his leg restrained) did to this beautiful camel. Note: This video was not made by the Atlanta Mosque, but once again, this is what they are calling for. (I have added another video below.)

If there is one thing I despise, it is animal abuse, and I will be reporting this Mosque to numerous authority figures. I need you to please help out North American Infidels, and do the same.

The Atlanta Humane Society can be reached by clicking HERE.

Atlanta/Georgia ASPAs can be reached by clicking HERE.

The Mosque can be reached through the following avenues. (NO threats!)

← Is the Jihad Coming to the Antipolo Cathedral?
NY Muslim “Activist”: There is Nothing Objectionable in the Koran →