Riding the NYC subway this holiday weekend, it was not hard to notice two Muslim women who had entered the train and mistakenly thought they were at home. 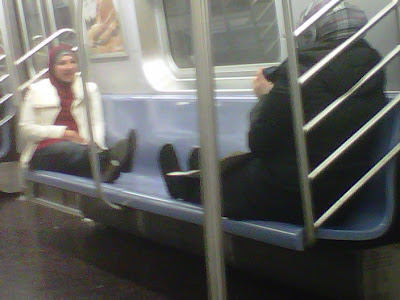 As I was watching the women, the train stopped at two more location. While commuters were boarding, the Muslims did not even think of letting other people sit down.

After filming that, I put my camera away and we made two more stops. On the second one a woman with short dirty blond hair, approximately 45-50 years-old, walked right up to the Muslim woman on the left. She motioned her hand while telling her she was going to sit there. The slave to Allah was slow to move, but did finally sit upright like a normal person. As soon as the lady sat she angrily said, “What do you think you are home?!”. The Muslim mumbled something, and the woman replied, “Ah come on!”. She just did not want to hear it. After being confronted for her rude behavior, the want to be Aisha sat staring with her eyes glued to the floor. I applaud the blond hair infidel!

← USA: Popular Muslim Comedian: Muslims CANNOT be Stopped!
US Politician Calls for All Muslims to be Discharged From Military! →

75 comments for “Muslim Women Think They Own NYC Subway”