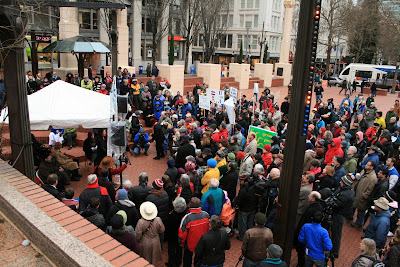 Hat tip on the articles, and pictures to New Crusader.

Here we go again. Another Islamic terrorist plot is foiled (Christmas tree lighting plot), and non-Muslims come running out to hear Muslims tell them what they want to hear. That Islam is a religion of peace. Hearing this is much easier for them, than actually facing 1400 years of Islamic terrorism and conquest. The rally took place this past Sunday at the Pioneer Courthouse Square in Portland. Lets review it.

The high-profile case has further stirred misconceptions about Islam that need to be clarified, said Mohamed Kassim, an OSU senior.

The day after the attempted bomb plot in Portland, Kassim said some students questioned whether Mohamud was scheming simply because he is Muslim. “That’s not what Islam is about,” Kassim told them.

Kassim have you ever read the Sahih Muslim ahadith? Because this world renowned Islamic scholar proves your comment to be false.

Muslim Hadith Book 019, Number 4311:
It is narrated on the authority of Jabir that the Messenger of Allah (may peace be upon him) said: War is a stratagem.

The definition of stratagem can be found HERE.

Since the vigil, Mohamed Siala, director of the center, wanted a similar rally in Portland where he and other religious leaders could publicly condemn terrorism.

“Such heinous acts do not represent Islam in any shape or way,” Siala said at Pioneer Square. “They are against the desire of Muslims, even if some Muslims betray their faith and do acts of terrorism.” 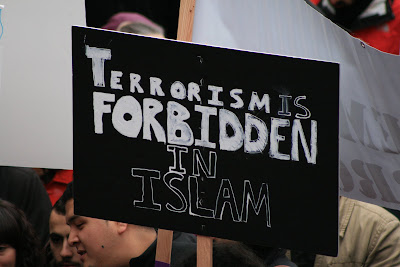 Mohamed, have you ever done a thorough study on the man you were named after? Because if you did, you would know your statement is just not true.

Sahih Muslim Hadith Book 004, Number 1062:
Abu Huraira reported that the Messenger of Allah (may peace be upon hlmg) said: I have been given superiority over the other prophets in six respects: I have been given words which are concise but comprehensive in meaning; I have been helped by terror (in the hearts of enemies): spoils have been made lawful to me: the earth has been made for me clean and a place of worship; I have been sent to all mankind and the line of prophets is closed with me.

Sahih Bukhari Hadith Volume 4, Book 52, Number 220:
Narrated Abu Huraira: Allah’s Apostle said, “I have been sent with the shortest expressions bearing the widest meanings, and I have been made victorious with terror (cast in the hearts of the enemy), and while I was sleeping, the keys of the treasures of the world were brought to me and put in my hand.” Abu Huraira added: Allah’s Apostle has left the world and now you, people, are bringing out those treasures (i.e. the Prophet did not benefit by them).

“Why can’t we all live in peace?” Siala asked. “Hatred and violence only brings more bloodshed.”

Because your religion calls for perpetual war, that is why.

Sahih Bukhari Hadith Volume 1, Book 8, Number 387:
Narrated Anas bin Malik: Allah’s Apostle said, “I have been ordered to fight the people till they say: ‘None has the right to be worshipped but Allah.’ And if they say so, pray like our prayers, face our Qibla and slaughter as we slaughter, then their blood and property will be sacred to us and we will not interfere with them except legally and their reckoning will be with Allah.” Narrated Maimun ibn Siyah that he asked Anas bin Malik, “O Abu Hamza! What makes the life and property of a person sacred?” He replied, “Whoever says, ‘None has the right to be worshipped but Allah’, faces our Qibla during the prayers, prays like us and eats our slaughtered animal, then he is a Muslim, and has got the same rights and obligations as other Muslims have.”

Islam says for Muslims to dominate non-Muslims. I could do without that kind of “love”.

Siala and other Corvallis religious leaders say they have embraced one another’s faiths to show their unity and to honor their diverse community. John Dennis, for example, senior pastor at Corvallis First Presbyterian Church, participated in Ramadan this year, Islam’s holiest month. It showed him how different cultures can be unified.

Here we have another so called Christian leader who is promoting a religion, that is out to destroy his, and insults the Jesus of Christianity.

Likewise, during the first week of December, Benjamin Barnett, rabbi at Beit Am Synagogue in Corvallis, invited Siala and Imam Yosof Wanly to celebrate Hanukkah with the Jewish community. After the party, Siala told Barnett of his hope for a rally in Portland at Pioneer Courthouse Square. The two leaders met several days later at Sunnyside Cafe in Corvallis to plan.

“I was immediately very moved and inspired by that,” said Barnett, who had not been able to attend the Corvallis rally after the fire at the mosque. “It was a very courageous choice on his part, to stand up there as a Muslim leader, to condemn the act in the name of Islam.”

Maybe he is against violence, maybe he isn’t. His religion encourages him to lie. Did you know this Rabbi? Why don’t you ask him his views on Israel? Does he condemn Sharia Law? 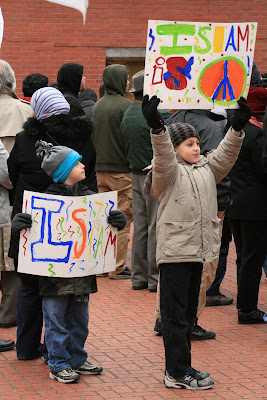 This is not the end of the story though. Shir Tikvah a liberal Jewish organization in Portland, has written a letter of support of the Muslim community and Islam.

From Rabbi Ariel Stone: Our Jewish Community Must Stand Up for Muslim Communities and Holy Places
December 6th, 2010
Hanukkah 5771 – In the wake of the attack on the mosque in Corvallis, we as Jews must not fail to speak out and act in support of our fellow citizens, the Muslim and Arab communities.
We must reject any attempt at collective judgment or punishment on the part of those who see the blame for violence that falsely calls itself Muslim. Jews know well that at times of political tension,minority groups are vulnerable; as Jews we are called upon to insist upon justice for all. Tzedek, tzedek tirdof, l’ma’an tikhyeh, “justice, justice shall you pursue, that you may live” (Deut. 16.20). Jews have often been made to suffer as scapegoats; we have known what it means to be targeted for blame unjustly. There are those who willfully refuse to make distinctions between those who do violence in the name of religious belief, and the much larger peaceful adherents of that religion. It is done to Jews, and it is done to Muslims, and we dare not stand idly by the blood of our neighbor in this. In the end, there is no distinction; what happens to one happens to us all. All Jews and all Jewish organizations and institutions must stand up and reject the targeting of Muslims and Arabs; we must affirm with our words and acts what the Shura Council of Oregon and Southwest Washington affirm: that Islam is a religion of peace, and we will not allow it to be hijacked by murderers who falsely wrap themselves in its cloak. We must stand together, we who know what it means to stand alone.

Rabbi, I will make a list for you. Lets see if you respond after I email this to you.

1. Did you see those verses above about Mohammad? Did he falsely claim to be a Muslim?

2. You mention the “larger” peaceful adherents”. Please tell me who the President of the Muslims Against Hamas organization is.

3. You only seem to think that violent Muslims are a threat. Do you know that Muslims control Temple Mount? That shows us how Muslims slowly takeover without being violent. The threat of Islam goes way beyond violence, and Islam should not be supported at all by non-Muslims.

4. Once again, look at the verses above. Are you claiming that Mohammad hijacked his own religion?

5. Did you do any research on this issue at all, or did you just blindly believe what the Shura Council of Oregon and Southwest Washington told you?

The Rabbi can be reached HERE.

The willingness to remain purposely blind to the threat of Islam, only empowers Islam. The slow suicide continues…

← Member of Brooklyn’s Masjid At-Taqwa Responds to my Call to Prayer Video~ Finally Admits he is for Sharia
Merry Christmas! →

42 comments for “Portland Oregon: Christians, Jews, and Muslims Rally in Support of Islam”