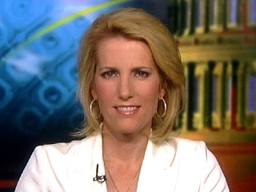 As most of you probably know I have been calling for an end to Muslim for several years now, but have been disappointed that there are not enough prominent people also supplying answers to the threat of Islam. That is besides the fact that most of the mainstream media has been complacent with the enemy ideology of Islam. But now thankfully radio host Laura Ingraham has stepped up to the plate, and has spoken out against Muslim immigration. We here at Logan’s Warning/North American Infidels (NAI) salute her for taking such a brave stance in order to protect America from further Islamic infiltration and destruction. Thank you Laura!

Right-wing radio host Laura Ingraham announced on her program Monday that she’s long believed the United States should shut down all immigration from central Asia and any nation with a majority Muslim population.

Going even further, Ingraham said she’s not sure why the U.S. allows people from central Asia either, particularly ethnic Chechnens, two of whom have been identified as the Boston bombing suspects.

“I would submit that people shouldn’t be coming here as tourists from Chechnya after 9/11,” Ingraham said. “Dagistan, Checnya, Kergystan, uh-uh. As George Bush would say, ‘None of them stans.’”