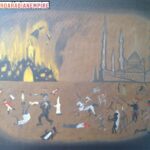 It’s been years since I have received any “fan mail” from “Sheik” Faarooq Al Mohammedi, a supposed representative of the The United Muslim Nations International. An organization that appears to have only one member. Him.

END_OF_DOCUMENT_TOKEN_TO_BE_REPLACED

Shortly after the Logan’s Warning reporting team filmed the exclusive interviews from the “Save India from Islam” rally in NY, we received the following warning from the United Muslim Nation International Organization (UMNI):