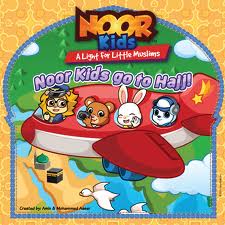 In the past I have spoken about the free market jihad that Muslims are waging across America. Today we see another example of this.

We’ve been blessed with an incredible opportunity to get Noor Kids on Wal-Mart shelves across the country. This will be, without a doubt, our most challenging effort yet. We are confident that with the support of our Noor Kids family, we can dream big!

Right now, more than ever, we really need your support. Take a look at the YouTube video we’ve created that details the initiative:

This is a wonderful chance for our community to come together in order to build confidence in the religious identity of little Muslims. We’ve prepared a press release on our website for those interested in learning more. Please spread to word to your friends, family, and loved ones so that they can become familiar with who we are and what we’re trying to do.

I feel sorry for the children who are brainwashed into being slaves of Islam, but the truth is that Islam does not fit in with non-Islamic countries. It slowly destroys them.

“…hoping to provide American integration so that way kids feel their religion is normal.”

WARNING! Islam not normal. Can cause sudden death due to decapitation, bomb explosion, dismemberment and more. Encourages non integration and false sense of superiority. Follows the misleading and deceptive way of a pedophile rapist and thug from the 7th Century. Will cause serious emotional physical and spiritual damage. NOT for human consumption.

This warning(or something like it)should be on all muslim products. Better yet they should just be banned.

That’s a pretty big generlization you made there bud

Ok sorry sir but please don’t generalize like that. Not all of us are radicalists.

Do you condemn Sharia Law?

Since Islam cares for NOTHING but itself and the expansion of it’s control over the non Islamic world, everything it does is jihad.

To take what Tommy said a step farther…islam does not even care for or respect itself when we see sunnis and shites bombing each other. And they then use that to their political advantage by saying that they are victims of terrorism too.

How about protestants and catholics?

Hey buddy try and do a little research.

Thanks for the AM laugh that outed barry as a koranimal right at the end of the video. You see, Infidels, EVEN in kiddie books the koranimals know about barry’s faith. LoL!

Damn, that is hilarious!

More lies from the religion of piece. I feel sorry for kids who are sucked into this and are being brainwashed to believe that islam really cares for them. Islam is a ideology and a dangerous one. ANd if they want sharia law then go to a country where they already have it as America doesn’t want it. Peace to all non-muslims who see islam a dangerous.

dude first of all it’s “peace” not “piece”. Secondly, Islam teaches peace and respect. Third, why do you have to disrespect our relgion while we have full respect for yours? I’m 14 years old and I’m pretty sure Islam hasn’t corrupted me…

So glad you can spell, but for a 14yr old you’re very ignorant. To be more precise you feign ignorance as part of your jihad.

“Eleven teenage boys have been rescued from an Islamic correction centre in Nairobi where they were chained, tortured, and indoctrinated with violent anti-Christian ideas. Armed police raided the school in a rundown Nairobi neighbourhood after Guleed Ahmed, a 16-year-old from Leicester, faked an illness to escape and raise the alarm.
Inside they found 10 other boys, from Kenya, Sweden and Ethiopia, chained by their hands and feet and confined to a dark, foul-smelling room.”
http://www.factsofisrael.com/blog/archives/000607.html

THIS MUST BE FULL IMMERSION ISLAM.

“Third, why do you have to disrespect our relgion while we have full respect for yours?”

“Islam is the only religion in the world which does not allow its followers the freedom to change faith. According to Shari’ah laws (extracted from the Qur’an and Sunnah), apostates of Islam must be sentenced to death.”
http://www.wikiislam.net/wiki/Persecution_of_Ex-Muslims

THIS LAST LINK SHOWS COUNTRY BY COUNTRY THE TREATMENT OF MON MUSLIMS BY MUSLIMS.

So this Kumayl, is what you call peace and respect. WOW! People sure have it good under islam. I can just FEEL the LOVE!

Allah U Hideous abuser.
Hammadmo you murderous thug
Kumayl, the shame of humanity, trolling for Imams, following the pattern of Hammadmo.

Why do you take the actions of radicalists as a generalization for all? If one Christian bombs someone i’m not gonna assume all Christians are like that. Come on dude just respect me and I’ll respect you. I don’t feel comfortable being attacked because my religion is being used as an excuse for radical acts. I understand why everyone’s angry and I’m just as angry as you. I don’t like people dying. I just hope you can understand that not all of us are like that. In fact I’d love if any person who commented on this page could come to my mosque and my saturday school and see what they teach. The people in the examples you gave unfortunately use religion as an excuse for their actions. But me, I’m not a violent person, I,ve never hit anyone else in my life. In fact i’m completely against violence. Our Prophet teaches us that to receive love you gotta give love so I’m reaching out to you and asking you to understand my viewpoint
Thanks,
Kumayl

Muslims across the West are pushing for Sharia. Do you really think I am going to stop speaking out against Islam, because you are “offended”? If you do not like it leave Islam.

Mohammad called for the dominance over non-Muslims, and raped sex slaves. Don’t try and con me.

This is insane. I had visions of myself throwing every copy into a shopping cart, and wheeling to the nearest trash bin, while with-holding one copy and slapping it into the Store Manager’s chest explaining why I was now boycotting the business.

Whatever you do, just don’t burn them. The koranderthals will go ape!

[…] Attention Parents: Muslims Attempting to get Islamic Kids Books onto the Shelves of Walmart  […]

Does that book say Noor kids go to Hell? 😉

I got a security warning about this, that the person might be phishing. I suppose that a sinister link could be made by clicking the number given.

On the book cover, three white faces, one blonde woman, a mosque and a dove of peace. LOL. Not very subtle.
Glad to hear that they are only dreaming big. Dream on.

I believe Ali sina produced a comic book based on Mohammed. And its not based on bullshit. So, why isnt that on the shelves? Fair is only fair.