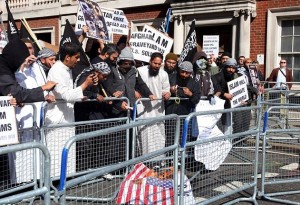 The UK’s Anjem Choudary continues to show us why he is an IslamoPUNK. On the 10Th anniversary of the 911, 2001 Islamic terrorist attacks on America, the slave to Allah decided to hit the streets and burn our flag.

Besides showing their usual hatred for America, their arguments were weak.

At the 1:05 mark Abu Izzadeen states America is engaged in religious wars overseas. If that were true, we wouldn’t have allowed Islam into the Constitutions of Afghanistan and Iraq.

At the 1:47 the Muslim speaker states 911 was our fault. But the truth is that Islam calls for perpetual war.

To make matters worse the cowardly cops of the UK, order the pro-American mates to break up their rally. But Anjem and his crew are allowed to rule the streets. PATHETIC!

11 comments for “UK: IslamoPUNK Choudary and his Muslim Mob Burn US Flag on 911! ~ Video”