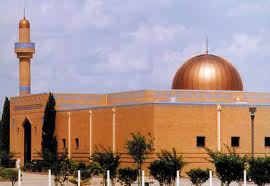 Unfortunately for us the fight  goes on, and tonight we move from one internal threat of Islam to another. Now we will take a look at the Islamic Society of Greater Houston, located at 3110 East Side Street, Houston Texas. Once again, the non-Muslim visitors here will not like what they are reading.

From the ISGH’s about page.

· To provide a platform for mobilizing our energies towards reconstructing an Islamic community in accordance with the principles of Qur’an and Sunnah.

In other words they are doing there part in turning the United States of America, into the Islamic state of America.

To provide a multitude of services for fulfilling the educational religious, social, economic and cultural needs of Muslim community in Houston.
· To provide our children and ourselves an Islamic identity in order to protect our community from non-Islamic environments; and…

That wouldn’t happen to include the ways of the kuffar (non-believers) would it? If the members of the ISGH don’t care for the American way of life, they might be happier living in an Islamic country. But unfortunately they will not leave, as they are here to try and takeover.

To Present the Islamic Point of View

Which means they will tell non-Muslims what needs to be done to suit Islam. So far we have seen their agenda, but there is something that makes things even worse with the ISGH. They are no small organization, not even close.

For those new to the subject, masjid and musallas equates to Mosques and prayer rooms. As we move on we see that this is no mom and pop shop.

Democratic, open and accountable charitable religious organization managed by a Board of Directors that is elected by the Muslim members in the greater Houston area. Local representation through self-managed Councils in each Center.

Like I said, this is no mom and pop shop. Now lets take a quick look at their constitution.

– be obedient and faithful to Allah, His commandments and the traditions of the Prophet Muhammad (p.b.u.h.).

– abide by the provisions of the Constitution and Bylaws of the ISGH, and will work towards the unity of Muslims in the Greater Houston area.

– conduct the affairs of ISGH members with justice and honesty, and will safeguard the trust of the ISGH assigned to me for the best interest of the Muslim community.

– not seek any personal glorification or financial gains by and through the use of this office.

May Allah Almighty help me to fulfill this oath – Aameen.

Unless I missed it, there is nothing in there about being loyal to America. This might have something to do with it.

(e) Has signed a statement that he:
– Does not himself seek an elected position
– Does not put his decisions or other people’s decisions over and above the
decisions of Allah in the Quran and Sunnah
– Is obedient to Shariah
– Does not commit major sins

Need to find to find a ISGH Center? Unfortunately there are plenty of them.

How about an Islamic school?

Is that enough Islam for you? Well it gets worse, this organization is even hitting the prisons to increase the army of the enemy ideology. For some reason they have not done a good job of keeping their website updated. But I did call the ISGH, and the number is still live.

“Let there arise from among you a group inviting to all that is good (Islam), enjoining the good and forbidding evil. Such will prosper.” (3:104)

Audiotape for 30th Juz recorded by Sh. Moustafa Mahmoud provided to each prison.

Recommended Dawah Material has developed over the years with these dawah activities.

Quranic Studies have been the basis for all this activity. It is all due entirely to the Grace of Allah SBW. Presently in and around North Zone alone, as many as 32 Quranic Studies on weekly to monthly basis are held amounting to over 2000 hours of Quranic education per month.

Prisons lost to volunteers earlier and reincorporated in monthly rotation are Holiday, Ferguson, Pam Lychner, McConnell, Hughes, Beto & Gurney. Byrd, Limestone DC, Hodge, Powledge, Hilltop, Garza East and Garza West have no longer been on rotation list of the Islamic volunteers from Houston. Ellis and Eastham units have been temporarily removed from the rotation of volunteers as a disciplinary action against the misbehavior of the inmates towards the chaplaincy department unrelated to the volunteers.

Muhammad Bey of Huntsville has been in charge for follow-up of the inmates released to Houston. Over 26 have been rehabilitated in the Houston community.

Dr Mazhar Kazi and ICNA have been actively involved in the education of the new Muslims and their integration in the community.

Did you see those numbers? Now please remember that is just from one Islamic organization. In the meantime, non-Muslims in America are arguing with each other, as to whether there is an Islamic threat or not. As a whole, we had better get our act together soon. Let us move on and see if there is any talk about assimilating. From their study circles page.

Respect for the Holy Prophet

Let us realize that the Holy Prophet r was perfect in respect of knowledge, character, morals, and deeds. There being no short coming in his traits. If we realize this fact, who can be an exemplary person for us beside him? He r is a perfect example for all of us and the best of individuals.

Yes guys, you read it correctly. The Islamic Society of Greater Houston believes that Mohammad the liar rapist, and terrorist was perfect. Did you ever wonder why Muslims will not criticize Mohammad?

Let us now ponder the directives of the Holy Quran and ahadith in this respect. Allah says:

1. That you (people) may believe in Allah and His Messenger and that you assist and honor him, (that you) and glorify (Allah’s) praises morning and afternoon. (48:9)

2. So by your Lord, they will not be momin till they make you (Muhammad r) judge in all disputes between them and find in themselves no resistance against your decisions and accept them with full submission. (4:65)

5. And honor him and help him and follow the light (Quran) which is sent down with him. They are those who reached their goal (successful). (7:157)

6. Make not (understand not) calling of the messenger among you as your calling one another. (24:63)

7. And whoever disobeys Allah and His messenger he has indeed strayed into plain error. (33:36)

8. O believers, don’t enter the prophet’s houses unless permission is given. (33:53)

9. O believers make not (a decision) in advance before Allah and His messenger. (49:1)

11. And those who annoy (hurt) Allah’s messenger for them is a painful torment (chastisement). (9:61)

12. O believers, raise not your voices above the voice of the prophet nor speak aloud to him as you speak to one another lest your deeds should be rendered fruitless while you perceive not. (49:2)

In hadith literature one reads:

1. The Holy Prophet r came to us in the afternoon. Water was brought to him for performing ablution and he performed ablution. The people around him began to gather the water that remained and rubbed it on their bodies.

2. Urwah bin Mas’ud t said that when he r commands them they race to obey. When he r performs ablution they compete to collect the water of his ablution. When he r speaks they lower their voices to a whisper and they do not look him in the face but lower their gaze in reverence to him r.

3. Urwah bin Mas’ud r said, “By Allah, never was it that the Messenger of Allah r cleared his throat and spat but it (the spit) landed in the palms of one of his companions who rubbed his face or body with it.

4. Urwah bin Mas’ud t relates from al-Miswar and others each vouchsafing for the other that when the Prophet r performed his ablution they almost fought each other for his water.

5. Urwah bin Mas’ud t said, “By Allah, I have been sent as envoy to the kingdoms of Caesar, Chosroes, and Negus, but I have never seen a king whose people honor him as the companions of Muhammad honor Muhammad.

6. Ibn Sirin has said that he submitted to Ubaydah t that he had a strand of the Holy Prophet’s hair that was given to him by Anas t. Ubaydah t said, “If I had it, it would have been dearer to me than the world and whatever is in it.

7. Asim Ahwdi t narrated that he saw the bowl of the Holy Prophet r with Anas t. It had split and was held together with silver threads. He added that the bowl was very grand. It was made of the finest wood. He also quoted Anas t as saying, “I had offered the Messenger of Allah r to drink from it several times.”

8. Salim bin Ja’d t reported from Jabir bin Abdillah t, “While I was with the Messenger of Allah r and it was time to pray the ‘asr prayer, there was very little water left that was presented to the Holy Prophet r. He r put his hand into it and then opened his fingers and said, ‘Those who want to perform the ablution may come here and benefit from the favor of Allah.’ Water gushed out of his fingers and the companions performed ablution and drank the water. Thus I did not let the opportunity go and drank from it to my content because I knew this water was auspicious.”

What have we learned about the Islamic Society of Greater Houston? Allegiance to Islam, Mohammad, and nothing else.

55 comments for “Islamic Society of Greater Houston: We Need to Protect our Community From Non-Islamic Environments”