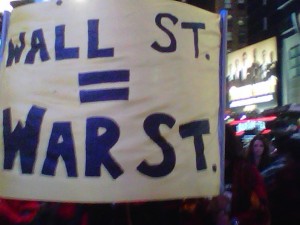 Well, the Islamic Prayer Day at Occupy Wall St is finally on, and now the Council on American Islamic Relations (CAIR) is in on it. I didn’t think Muslims would miss this opportunity to divide America some more. Their goal is to get some of the non-Muslim protesters at Occupy Wall St to convert to Islam, or at a minimum become Islam friendly. Unfortunately they will succeed.

CAIR-NY is proud to support and invite you to Friday Prayer at Occupy Wall Street this Friday, October 21st, ( 1pm to 3:30pm) where we will join in solidarity with “the 99%.” Jummah, hosted by Majlis Ash-Shura (Islamic Leadership Council of New York) is scheduled for 1pm at Zuccotti Park. A sermon on social justice in Islam will be delivered by Imam Aiyub Abdul Baki.

CAIR-NY’s endorsement of Friday Prayer at Occupy Wall Street stems from a conviction that many of the issues brought into the international spotlight by Occupy Wall Street affect Muslim communities disproportionately, and it is up to us to stand up for our rights and show the world what democracy and peaceful protest look like. Look for our table at Zuccotti Park to obtain information about our current projects and to expand the role of New York Muslims in the Occupy Wall Street movement.