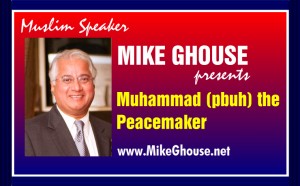 Recently I posted an article here entitled “Sean Hannity: Kissing Islamic Ass!”. It was sent to Hannity on Twitter by numerous people. Predictably Sean took the easy way out and ignored it. Apparently he  cannot refute my statements about him and Islam. But Mike Ghouse (MG), one of Sean’s Muslim “friends” has responded to Logan’s Warning. This is the second time that the interfaith Islamocoman has tried to refute me on Islam. The first time he failed miserably, and this time it will be no different. Mike’s true colors will come out even more…

Looking at the title he used on his website, Mike picked up my article on Right Side News.

Sean Hannity Does Not Understand the Threat of Islam in America

There is no such things as a right wing group, but there is an attitude among individuals that may be called right wing, and that attitude is sticking to the guns, no matter what information is out there, and facts simply don’t matter to them. Apparently the writer of this article in the blog “Logan’s warning” carries that attitude from time to time.

Here is my response to his blog picking on me, Imam Feisal and Islam.

Right off the bat we see Mike play the Muslim victim card, as he clearly takes a stand for Imam Feisal Rauf who wanted to stick a dagger in the heart of NYC with a Ground Zero Victory Mosque, and Islam. Please keep in mind that Hannity has called Ghouse a “friend”.

First the bad part of the Sharia like chopping hands, or stoning the adulterer is not practiced anywhere but Iran, Saudi Arabia and Nigeria.

According the Ghouse the only bad parts of Sharia are amputation and stoning. Child marriages and the rape of sex slaves (POWs) are OK. Got it Mike. What a guy!

Islamic amputations are also happening in at least Somalia.

Besides that, Muslims in the UK have stated they will implement amputation if Islam ends up governing there. To make matters worse there is the following:

PUPILS at Islamic schools across Britain are being taught how to chop off a criminal’s hand and that Jews are conspiring to take over the world, a BBC investigation has found.

Up to 5000 pupils aged between six and 18 are being taught Sharia law punishments using “weekend-school” text-books which claim those who do not believe in Islam will be subjected to “hellfire” in death.

Let’s see what else Mike has to say.

Secondly it cannot be called Islamic when 53 other Muslim majority nations are not following it.

Ummm…..Mike. If you care to take a look at the video above, it shows that Koran verse 5:38 calls for amputation. Is Mike saying the Koran itself is not Islamic? His argument is laughable. Mike also implies the stonings are not Islamic.

Sahih Bukhari Hadith Volume 9, Book 92, Number 432:
Narrated Ibn ‘Umar:
The Jews brought a man and a woman who had committed illegal sexual intercourse, to the Prophet and the Prophet ordered them to be stoned to death, and they were stoned to death near the mosque where the biers used to be placed.

I guess Mohammad himself was not Islamic. Ghouse do not even try the Ahadith do not count game with me. There is an article on your site posted by you which says they are infallible.

Where did the Shari’a come from? Its initial source is the Qur’an, revealed in its entirety to humankind through the Prophet, Muhammad. There is another source, which we discussed earlier, based on the tradition, God has not invested in any human being what he placed in the prophet. A series of traditions about the prophet, what he said, what he did, are called hadith. We gave some dental examples earlier. These illustrate his way, or Sunna.

Let’s go over why the Qur’an, and the traditions, or Hadith, are not just convenient sources, the reality that you have to start somewhere. Rather, they are infallible.Understanding why this is so is really the opening to understanding Islam.

In case Mike wants to play some more games and start deleting items from his site I took screen shots. 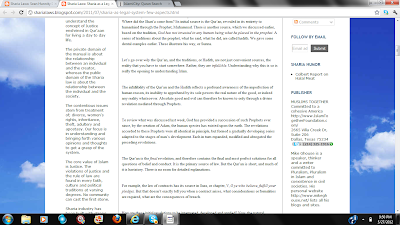 Here is what Ghouse had to say about that article.

Sharia as a Legal System – a few aspects

The best way to communicate an idea and practice is for the reader to relate with it through cultural or similar references and anologies. This Author Kennedy has simply done that. It is a long article, but if you have an interest in Sharia, it is a good one to read. By the way all postings on this site are articles that will make you think, inspire rather than react.
Mike Ghouse
www.MikeGhouse.net 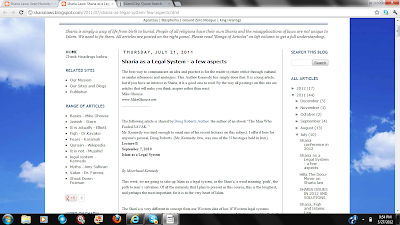 Obviously Mike will say anything to try and counter the critics of Islam. But wait, in part II his lies get bolder and even more comical!

← Queens NY: Are Christians Waking up to the Threat of Islam?
Walid Shoebat Foundation Takes Stand for America~ the Truth on Islam~ and Logan’s Warning~ Calls out Hannity on Islam! →