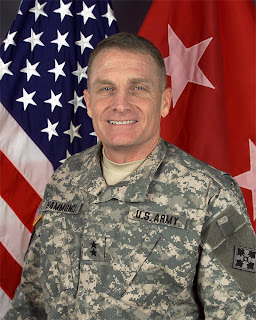 First off I would like to say that this story is from June, but I am posting it again for two reasons. The first is to remind us just how ignorant many US military leaders are when it comes to Islam. The second reason it to have this info on my new site. Yesterday the FBI announced that they will be conducting an investigation into the Islamic terrorist attack at Fort Hood. They want to learn what happened before the shooting, as all the warning signs were there about Hasan and no one had the guts to do a thing about it. They were frozen in fear and did not want to offend Islam.

This Major General Hammond is also part of the problem, as he is selling the Islam is a religion of peace lie. Major General Hammond if this post ever gets to you, I challenge you to a debate on this so called “beautiful” religion. This religion allows lying, rape, and the extortion of Jews and Christians. What is so beautiful about that? Did you even know these facts? Please do the country a favor and educate yourself sir!

Representatives of the Islamic Society of Colorado Springs met Thursday with Fort Carson military leaders at the Army base to discuss ways to improve cultural awareness and an understanding of Islam among deploying soldiers.

Maj. Gen. Jeffery Hammond, commanding general of the 4th Infantry Division, initiated the meeting in hopes of developing a better cultural-awareness program for the thousands of soldiers already at Fort Carson and the hundreds expected to arrive this summer.

“The weakness of those programs was that they were informal and occasional,” Yousufi said.

Meanwhile, a new family of thousands of soldiers were officially welcomed on Thursday morning.

The 1st Brigade Combat Team, 4th Infantry Division uncased their colors at a ceremony at Fort Carson on Thursday. The tradition signifies the brigade’s official arrival to the post. The 1BCT Raiders spent the past 13 years at Fort Hood, Texas.

The Army Corps of Engineers also presented an award to the brigade, honoring their new headquarters building for being energy efficient and environmentally friendly.

The brigade’s arrival brings about 3,500 soldiers and their families to the Colorado Springs community.

29 comments for “US Maj. Gen. Jeffery Hammond: Islam is a Beautiful Religion”