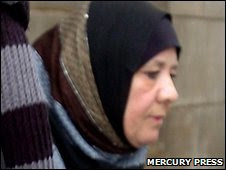 Here is the update to the “UK: Two Christians go to Trial for “Insulting” Islam” story. Thankfully they were cleared of all charges and Islam has to take a step back. Cheers for freedom!

A devout Christian couple have been cleared of insulting a Muslim guest because of her faith.

Benjamin and Sharon Vogelenzang were accused of launching a tirade against Ericka Tazi at the Bounty House Hotel in Aintree, Liverpool, in March.

The couple denied using threatening, abusive or insulting words which were religiously aggravated.

Mrs Tazi, who converted to Islam 18 months ago, spent a month at the hotel in Church Avenue while attending a course at Aintree Hospital.

She claimed the couple became enraged when she wore a hijab on her last day and accused Mr Vogelenzang, 53, of asking her if she was a murderer and a terrorist.

She also told the court Mr Vogelenzang called the Prophet Muhammad a murderer and a warlord and likened him to Saddam Hussein and Hitler.

But the couple denied her version of events and claimed Mrs Tazi told them Jesus was a minor prophet and that the Bible was untrue.

Mr Vogelenzang admitted that his wife may have referred to the hijab as a form of bondage, but said he only listed historical figures such as Hitler, Nero and Mao to make light of the situation.

Earlier on Wednesday the court heard that takings at the couple’s hotel were down by 80% since they were prosecuted for the public order offence.

Speaking from the witness box, Mr Vogelenzang accused 60-year-old Mrs Tazi of “trying to ruin his business” during heated scenes.

The two-day trial ended when Judge Clancy ruled that the evidence against the hoteliers was “inconsistent” and dismissed the case.

He told the couple that religion and politics was the “tinderbox which set the whole thing alight” because of both parties’ “strongly entrenched positions”.

Explaining his reasons for dismissal, Judge Clancy said Mrs Tazi’s claim that she was verbally attacked for up to an hour had not been backed up by the other witnesses.

He also said the language Mrs Tazi used in the exchange “did not quite form the same religious view” that was put to him on the stand.

Judge Clancy said: “I’m not satisfied on the facts that this case has been made out.”

Mr and Mrs Vogelenzang were backed by campaign group The Christian Institute which held demonstrations of support outside the court.

Their supporters cheered as the couple emerged from the building after the hearing.