I hate to admit, but although the voices against Islam are clearly on the rise, we are still losing the war, for now. Two of the main reasons we are losing this war are, irresponsible reporting from the media, and self-centered suicidal “Christians”/non-Muslims who carry water for Islam. I call them self-centered because I have spoken to plenty of them, and they have all followed the same pattern. Not an ounce of concern about Sharia continuing to creep in, and their future generations being forced to “live” under the barbarity of it. I call them suicidal because they are ushering in their own demise.

Today we get a dose of both all at once! Introducing the HuPo’s Craig Considine!

No other leader in world history has been more scrutinized and ridiculed than Prophet Muhammad. Since the founding of Islam in 632 AD, Christians and Jews have described the Prophet of Allah as a blasphemer, bigot, terrorist, and pedophile, among other slurs. However, according to a new book The Covenants of the Prophet Muhammad with the Christians of the World (published by Angelico Press, 2013), these accusations are found to be dishonest, prejudiced, and not based on sound scholarship.

Apparently Craig wants to play lawyer for Mohammad. But right off the bat I prove that Craig is either a liar, ignorant, or both. I will do so by using the Koran and scholarly works.

Let’s bring this madman to trail! 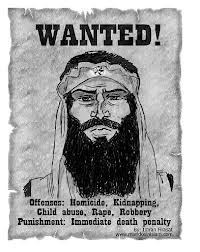 The charges are the following:

According to the Koran God (Allah) wants the People of the Book or “those given the scripture”, Christians and Jews to be dominated under Islamic rule. Of course Christians and Jews could consider that blasphemy. As Muslims claim there is one God. Now why would God want his own religion dominated by others? It makes little sense.

—Abu Hurayra reported that the Prophet, may Allah bless him and grant him peace, said, “Do not give the People of the Book the greeting first. Force them to the narrowest part of the road.”

Yes, Mohammad was a bigot. Guilty as charged!

This one was easy. Mohammad pleaded guilty to the charge.

Narrated Abu Huraira:
Allah’s Apostle said, “I have been sent with the shortest expressions bearing the widest meanings, and I have been made victorious with  terror, and while I was sleeping, the keys of the treasures of  the world were brought to me and put in my hand.” Abu Huraira added: Allah’s Apostle has left the world and now you, people, are bringing out those treasures.

I think it is safe to say that makes him a pedophile. Guilty as charged! In some states that would be a three strike law. Life imprisonment!

Craig, you are not off to a very good start here. But I will give you some friendly advice. If you are going to change careers, and you should, I would scratch researcher off the list!

Dr. John Andrew Morrow, author of The Covenants of the Prophet Muhammad, is a scholar who received his PhD from the University of Toronto and completed the full cycle of Islamic seminary studies. He was raised in a multilingual family in Montreal and Toronto, Canada. Morrow is also a Native North American of the Metis nation and proudly identifies himself as an “Aboriginal Person.”

Please stay tuned for Monday the 30th’s part ll. In which I continue to show you what Craig, and “scholar” Dr. Morrow didn’t…

FYI, I decided not to write part ll, because Craig could not even begin to formulate a response to the first one which I had Tweeted him. Case closed!

← London: Three Muslims Locked up for Trying to Impose Sharia!
European Politician on Syrian Refugees: We do NOT want the “terrorists”! →