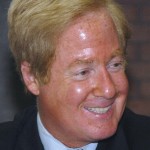 I have seen more than enough Islamic expansionism in America, to see that we are losing ground to Islam on a daily basis. Two of the main reasons we are losing this war is the reluctance to actually name the enemy, and supply long term answers. Unfortunately many of the most prominent names in this field can do no better than lay the blame on “Islamism”, and promote Dr.Mohamed “Zuhdi” Jasser as the savior of America. But the reality is that Islam itself is the problem, and after all of these years Jasser does not even have one Mosque that supports him. Promoting him is a complete waste of time.

In the past I have pointed out that Daniel Pipes, Frank Gaffney, Brigitte Gabriel, and Brooke Goldstein, are all guilty of perpetrating this crime upon America. In my “How do you win a war When you Have no Answers” article, I did also mention the Investigative Project of Terrorism’s (IPT) Steven Emerson. Since then I have not mentioned a word about him, but after tonight’s conversation with IPT on Twitter, I have no choice but to expose his ignorance and support for Islam itself. 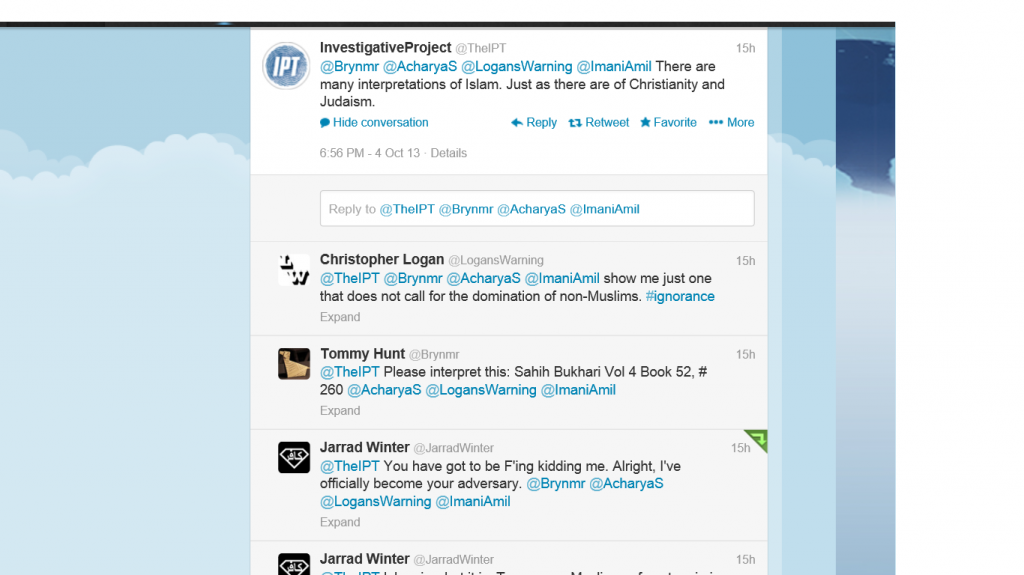 As you can see, Steve ignorantly stated there are different “interpretations” of Islam. Implying that there is a “good” Islam out there, that is going to defeat the “bad” Islam. But when I called him on it, he exited the building! I even tried to help him out and pointed him in the right direction….

I believe if you take a position on such a serious topic as Islam, you should be able to back it up. Not to make this post too long, I will post two translations that back up my point. Although I could easily add many more.

Fight those who do not believe in Allah or in the Last Day and who do not consider unlawful what Allah and His Messenger have made unlawful and who do not adopt the religion of truth from those who were given the Scripture – [fight] until they give the jizyah willingly while they are humbled.

It is He who has sent His Messenger with guidance and the religion of truth to manifest it over all religion, although they who associate others with Allah dislike it.

Now you might be asking yourself what point is in exposing this. My point is that we are not wining this war, and Brigitte Gabriel, Daniel Pipes, Frank Gaffney, and Steven Emerson are some of the biggest names in this field. Their attempt to create a “good” Islam is nothing more than a fantasy land policy, that has been a huge failure!

The tooth fairy is not coming to save the day!

As President of North America Infidels (NAI), I give you my word that we will never join that camp that is $elling America a bridge to nowhere. We will continue to name Islam itself as the enemy, and continue to provide long term solutions such as America becoming energy independent, ending Muslim immigration, and Mosque construction. It is time for a regime change! So please join thousands of other patriotic infidels by “liking” our Facebook page today!

← NAI Exclusive: NYC Muslim NOT Happy With Christian Preaching for Jesus!
Is Madonna Heading Towards Islam? →

125 comments for “IPT’s Steve Emerson Shows his Ignorance on Islam!”