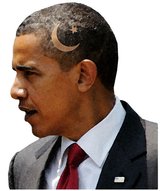 Before heading off to the Middle East, our Islamic loving “President” took time out of his busy golf schedule, and met with the con artists of the Muslim Public Affairs Council (MPAC).

(Washington, DC – 3/11/2013) – Today, the Muslim Public Affairs Council along with other Muslim and Arab American leaders met with President Barack Obama to discuss issues that will pertain to his upcoming trip to the Middle East. Haris Tarin, the Director of MPAC’s Washington, DC, office, attended the intimate meeting with the President, as he prepares his agenda for this visit to the Palestine, Jordan and Israel.

Tarin and others shared with the President some of the important work being done by the Palestinian people in achieving their aspirations for an independent and viable Palestinian state. The group also made recommendations on key messages and policy issues that must be considered by the Americans, Israelis, Palestinians and other people in the region to ensure a just and sustainable peace process.

“This meeting is an important first step by the President and his administration in ensuring that reliable voices of Palestinians and other concerned group and people in the region are heard,” Tarin said.

We are heartened that the President is beginning his second term with a trip to the region, and we hope that we can build a constituency for peace-making here in the United States and ensure that the Israeli-Palestinian conflict is not a zero-sum issue in our domestic discourse.

That statement is just another con by the insidious organization MPAC. Because “peace” under Islam means that Jews have to submit to Islamic rule.

Fight those who do not believe in God, nor in the Last Day, for, otherwise, they would have believed in the Prophet (s), and who do not forbid what God and His Messenger have forbidden, such as wine, nor do they practise the religion of truth, the firm one, the one that abrogated other religions, namely, the religion of Islam — from among of those who (min, ‘from’, explains [the previous] alladhīna, ‘those who’) have been given the Scripture, namely, the Jews and the Christians, until they pay the jizya tribute, the annual tax imposed them, readily (‘an yadin is a circumstantial qualifier, meaning, ‘compliantly’, or ‘by their own hands’, not delegating it [to others to pay]), being subdued, [being made] submissive and compliant to the authority of Islam

Besides being humiliated by being extorted, the Sahih Muslim Hadith call for Muslims to fight and kill Jews to reach judgment day!

Abu Huraira reported Allah’s Messenger (may peace be upon him) as saying: The last hour would not come unless the Muslims will fight against the Jews and the Muslims would kill them until the Jews would hide themselves behind a stone or a tree and a stone or a tree would say: Muslim, or the servant of Allah, there is a Jew behind me; come and kill him; but the tree Gharqad would not say, for it is the tree of the Jews/

If MPAC were truly for peace, they will condemn those verses. Let’s Tweet them and see….

Obama and MPAC, no friends of America or Jews. Just traitors from within.