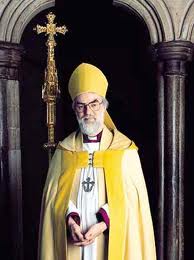 Now, this is exactly what I am talking about when I assert that there are FAR too many non-Muslims who are clearly supporting the ideology of the enemy. Such “sympathetic” non-Muslims are aiding in the destruction of Western Civilization. To make matters worse, some of the enablers of Islam are people in high positions of power, the UK’s Dr. Rowan Williams, Archbishop of Canterbury, for example. The Archbishop of Canterbury, who is the head of the Church of England. With that position, one would think that he would actually stand up for his own religion and those who are supposed to be his flock. Think again!

London – In the history of some countries there comes a period when political and factional murder becomes almost routine – Russia at the beginning of the 20th century, Germany and its neighbours in the early 1930s. It has invariably been the precursor of a breakdown of legal and political order and of long-term suffering for a whole population. And last week, with the killing of Shahbaz Bhatti, the Minister for Minorities, Pakistan has taken a further step down this catastrophic road.

To those who actually support such atrocities, there is little to say. They inhabit a world of fantasy, shot through with paranoid anxiety. As the shocked responses from so many Muslims in this country and elsewhere make plain, their actions are as undermining of Qur’anic ethics as they are of rational politics.

In your eyes, it is reasonable for the Koran to call for the dominance of Christians?

Or, perhaps the Archbishop is only going on the word of Muslims, and he himself has never even bothered to read the Koran?

But to those who recognise something truly dreadful going on in their midst – to the majority in Pakistan who have elected a government that, whatever its dramatic shortcomings, is pledged to resist extremism – we have surely to say, “Do not imagine that this can be ‘managed’ or tolerated.”

Define “extremism” Archbishop. Was Mohammad who called for the dominance of Christians, an “extremist”?

Did you not notice the name of the country is the Islamic Republic of Pakistan?

The government of Pakistan and the great majority of its population are, in effect, being blackmailed. The widespread and deep desire for Pakistan to be what it was meant to be, for justice to be guaranteed for all, and for some of the most easily abused laws on the statute book to be reviewed is being paralysed by the threat of murder. The blasphemy case of the Pakistani Christian woman, Aasia Noreen, so prominent in the debates of recent months, and the connected murder of Salman Taseer, the Governor of the Punjab, make it crystal clear that there is a faction in Pakistan wholly uninterested in justice and due process of law, concerned only with promoting an inhuman pseudo-religious tyranny.

Dr. Williams, why do you act like you speak for the Muslims of Pakistan? You do not!There is a reason that they wanted their own state, their sovereignty, and I’m pretty sure it has something to do with Islam…

Apparently, you have not read the Koran. So, now I have to ask if you have ever even glimpsed the Constitution of the Islamic Republic of Pakistan? If not, I will gladly help you out by supplying it here.

25. Equality of citizens.
(1) All citizens are equal before law and are entitled to equal protection of law.

Sounds nice, but then there is this part.

(2) Effect shall be given to the provisions of clause (1) only in the manner provided in this Part.
(3) Nothing in this Part shall affect the personal laws of non- Muslim citizens or their status as citizens.

Now we see the double-talk. Because the injunctions of Islam do affect non-Muslims.

Pakistan was created by Muhammad Ali Jinnah as a consciously Muslim state in which, nonetheless, the non-Muslim enjoyed an absolute right of citizenship and the civic securities and liberties that go with it. In common with the best historical examples of Muslim governance, there was a realistic and generous recognition that plural and diverse convictions would not go away and that therefore a just Muslim state, no more and no less than a just Christian or secular state, had to provide for the rights of its minorities.

Here’s a look at one of the “best historical examples of Muslim governance”.

Unfortunately, the Archbishop is not done bowing to Islam…

If the state’s willingness to guarantee absolute security for minorities of every kind is a test of political maturity and durability, whatever the confessional background, Pakistan’s founding vision was a mature one. The disdain shown for that vision by Bhatti’s killers is an offence against Islam as much as against Christianity in Pakistan.

Islam is an offence against Christianity. So why are you standing up for it?

What needs to change?

Most Muslim thinkers are embarrassed by supposedly “Islamic” laws in various contexts that conceal murderous oppression and bullying. Their voices are widely noted; they need to be heard more clearly in Pakistan, where part of the problem is the weakening of properly traditional Islam by the populist illiteracies of modern extremism.

Name them Williams, who are these voices? I have already proven beyond any shadow of a doubt that Islamic Law is oppressive. So have some integrity and stop fabricating things as you go along!

Bhatti died, for all practical purposes, as a martyr – let me be clear – not simply for his Christian faith, but for a vision shared between Pakistani Christians and Muslims. When he and I talked at Lambeth Palace in London last year, he was fully aware of the risks he ran. He did not allow himself to be diverted for a moment from his commitment to justice for all.

What shared vision? The same one that you have about Christians being “protected” by Islamic Law? As in the remainder of his article, the Archbishop continues to make statements without any factual foundation. Well here is a FACT: Christians are “protected” under Islamic Law. They are “protected” from Muslims! in as much as they pay the jizya (extortion) and bow to Islamic dominance.

Once the agreement is “violated”, under Sharia, Christians can be put to death or enslaved!

Why did The Archbishop leave out all of those pretty important facts?! Was he exhibiting ignorance or weakness? Either way, he is a no Christian leader. But, in actuality, he is a thorn in the side of Christianity!