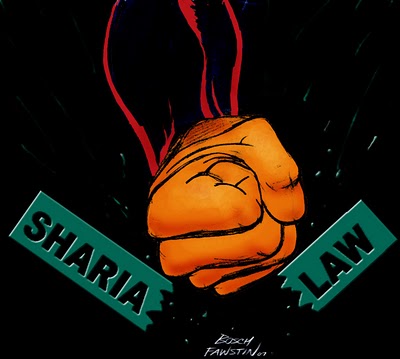 Some of the main points of my plan against Islam, are to become energy independent, end Muslim immigration, and officially ban Sharia Law. Thankfully the state of Louisiana has done their part, with Sharia Law. To preserve Western Civilization, we are going to have to vote in more politicians that are willing to fight Islam head on. The Netherland’s Geert Wilders would be one, and Vijay Kumar of Tennessee, would be another. We are finally heading in the right direction, keep on speaking out!

Within minutes Monday a legislative committee repudiated both Islamic and British law.

Neither, perhaps, represents an immediate threat to justice in Louisiana, but it was not entirely an alarmist and xenophobic stunt when the committee approved two bills by Rep. Ernest Wooton, R-Belle Chase. Mostly, but not entirely.

One of Wooton’s bills, which provides that no foreign law shall be applied here if it violates a right guaranteed by the American Constitution, is by any rational measure superfluous. But it is not unknown for immigrant litigants to invoke the tenets of Sharia to which, the committee was told, the Maryland courts deferred in a child custody case.

The Louisiana Supreme Court has so far insisted that cases in America are settled according to American law, but the committee figured it was wise to commit future jurists to that sound principle. At least the bill does no harm.

Wooton’s other bill may be largely symbolic too, although it is worth passing just in case. It does not single out the Limeys, but its refusal to enforce foreign defamation judgments that are “repugnant to the public policy of this state” is clearly aimed at them. Other states have passed, or are considering, similar legislation in response to a libel award rendered in London against the American writer Rachel Ehrenfeld.

It must be embarrassing for the British when American legislators lump them together with the avatars of medieval repression, but plenty of them are evidently aware it is fair, at least in the context of libel law. As a general election approaches, all three major parties in the UK promise to reform laws that have created “libel tourism” on the very island where John Milton wrote the book on press freedom, “Areopagitica.” That was in 1644, so it’s about time the government got the hang of it.

Instead the law enables large corporations or deep-pocketed individuals to stifle freedom of expression far beyond the shores of Britain, increasingly so in the Internet age, as Ehrenfeld discovered when her book “Funding Evil” identified Saudi billionaire Khalid bin Mahfouz as a financial supporter of al-Qaida.

bin Mahfouz was not about to sue in this country and not just because he would have had to contend with the First Amendment. He has such an unsavory past that he would probably have been ruled libel-proof in any case. No need to go into detail here. You can take my word for it. He won’t sue me.

Ehrenfeld’s book was not even published in Britain but, since a few copies had made their way there through Amazon, bin Mahfouz was able to play the libel tourist and take advantage of laws that so favor the plaintiff that the burden of proof is on the defendant.

The costs of defending such suits over there is so high that the mere threat of litigation generally suffices to squelch inconvenient opinions if the slightest grounds exist for British jurisdiction.

Thus plaintiffs rush to the British courts on the slightest pretext, as, for instance, when an Icelandic bank took offense to a story in a Danish tabloid.

Ehrenfeld declined to attend the proceedings in London and was ordered to pay a hefty sum by Justice Eady, the bete noire of British liberals. Eady has done much to galvanize the campaign for libel reform by ruling against an English journalist who asserted there was no evidence to support the miraculous curative powers claimed by chiropractors over there. Eady is so off the wall — he required the journalist to prove that the chiropractors had set out to deceive the public — that he was recently overturned on appeal.

But Ehfrenfeld is the cause cÃ©lÃ¨bre for Americans. New York took the lead in refusing to recognize libel awards from the British courts, and all hail to our legislators for joining in to strike a blow for freedom of expression. Maybe they love the press after all.

It won’t matter much if the next parliament does indeed reform the antique libel law. But our legislators are not dumb enough to rely on promises made in election campaigns.

← Indian Genocide – 80 Million Killed in the Name of Islam~ Video
Interested in a CAIR Internship? →

Leave a Reply to Always On Watch Cancel reply