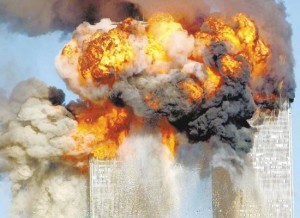 I know the argument: the protest has nothing to do with Islam. Sure. They are excused because they are disenfranchised and impoverished… Maybe America & the West should send them some more financial aid…?!

The argument by some tearjerkers cry out that it was unfair to kill Osama bin Laden because he was unarmed. Listen to me you crazies. Osama bin Laden was a satanic Muslim and an enemy that was plotting to murder more of us.

Hell yes, you shoot all satanic Muslims between the eyes, even if they are asleep, if you know that they’re out to kill you and your loved ones during their waking hours.

I couldn’t agree with you more. What can I add to that?
You nailed it.

Not satanic really just muslim (allah being satan himself). The rest are ignorant muslims who have no idea what islam really is in the first place. I do agree with you though.

I must agree with julietsm, you nailed it and speaking of nailing it i hope we nail many more freaks who serve islam the death cult!!!

If it is any consolation, Binnie is right now experience brand new sensations he never thought possible. Like getting his skin ripped off and then put back again and ripped off again. In between those cures he gets molten lead poured into his foul mouth over and over. He’ll better get used to it…

For the record it was a “kill shot” to the left hemisphere, i.e. eye and or thru the left ear. First time hearing about Islamic Crime Syndicate- will research. Jihadist call us the Great Satan and you use the word for Muslims, i.e. satanic Muslims! Back at you therapy for all- good going. Bin Laden was a thug just like his follower’s…heard on BBC that Pakastan was thinking of sharing statehood with Taliban- What’s next?
We are considered “snakes” lets cut off their heads for a change – that’s what one does with a snake in the grass and there are many of them.
Thank you.

Little doubt, like Fatah jihadists, Obama sees Hamas jihadists as suitable peace partners for Israel. Bush appeased Islam some, and then some. Obama appeases Islam much.

Obama will be sure to deliver the Philistines their jizya. He’ll toss them a few billion hoping that will calm them down. They won’t, of course.

It just proves one thing. Killing Usama bin Laden did nothing to curb violence. It only stirred the wasp nest. Not the wasps are angry. They’ll appoint a new “Queen of the hive” and continue on with their nest building.

Jerusalem is a shared city. It is cut into four so that all religions can share the holy mount in peace, but the Arab Muslims want nothing of it. They want the Jews and the Christians out of the land they claim is theirs and they will try to get it…first through UN/Western intervention, forcing Israel to comply with a one state solution and then through genocide!

tiffany, although Islam was never called a Islamic Crime Syndicate, Islam is exactly a Crime Syndicate now, and has been from the beginning because Islam was founded primarily for the purpose of destroying human beings, part way or all the way.

I’m the first person who began calling Islam a Crime Syndicate because Islam practices Criminal Activity. I’ve called Islam a Crime Syndicate for years. It’s quite obvious that Islam practices crime, and it’s quite obvious that Islam was established for the prime purpose to destroy human beings, yes, including the Muslims. But some Muslims are so stupid that they can’t understand this. Islam deliberately keeps Muslims in the dark, tells them huge lies like “Islam is the religion of peace.” Eighty percent of the Muslims are illiterate. `

Syndicate means a group of individuals or organizations combined in making a joint effort to undertate some specific duty. This definition fits Ialam well because its many sects undertake a specific duty, i.e. to destroy human beings.

You see, Islam practices Criminal Activity and has done so from the begining. Here are some of the crimes that Islam deliberately commits: Honor Killing; the murder of apostates who no longer wish to be associated to the criminal activity of Islam; stoning women to death; relegating women to second class; lashing underage little girls who attempt to run away from forced “marriages” to depraved, sinful, Muslim male sex perverts; legalized rape of underage, little girls by depraved, sinful, Muslim male sex perverts; lashing old women for flimsy excuses such as being caught alone with Muslim males who aren’t related to the women; hanging homosexuals and lesbians by the neck until dead; legally murdering “infidels;” legally chopping off clitorises of little girls; chopping off hands, feet, and gouging out eyes of petty thieves; polygamy, thereby, committing legal adultery; and much other crimes.

Perhaps you can now see that Islam is a Crime Syndicate established for the express purpose to commit heinous crimes, against humanity, in the name of the Muslim god, Satan, sometimes called Allah.

Why can’t we march on Washington to protest any money going to any muslim country. Do what Trump says, we helped them, take repayment in oil.

Gee….they burnt a flag and nobody blew up a mosque killing hundreds in the blast…….seems unfair somehow.