Chilling is just how organized those that wish to destroy America from within are! As the rally was going on, I was circling the throng of people from the outside. I observed more “stop ‘Islamophobia'” signs being laid in stacks on the sidewalk, brought out from a yellow bus. 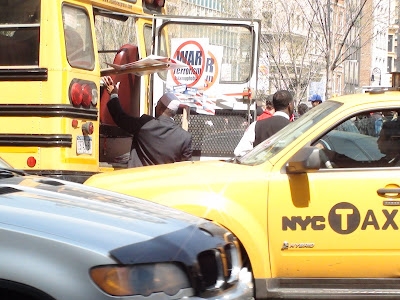 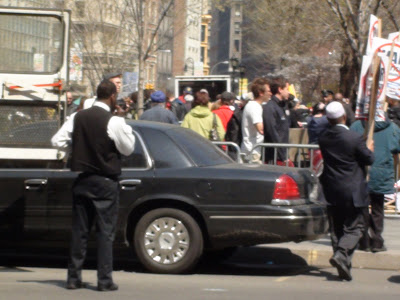 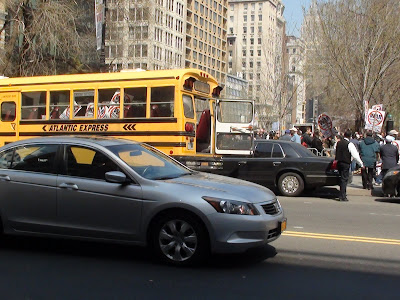 After their 2nd rally down at Foley Square, I headed back to Broadway. I ran smack into a dense Burqa city:

The Burqas headed to the buses:

How much longer until they are blocking off the sidewalks in NYC like they do in other major cities in Europe?!

Chilling is right Chris, especially given the mooslum record of rapid stealth jihad turning into territorial hegemony of urban geographical areas in other Western countries that have given them political representation and staging bases for waging violent holy war and religio-cultural imperialism based on their supremacist creed!

Chris – I am sure you know this already, but we can not rely on the WH or Justice Department to help in these matters:

At times I feel overwhelmed!

Margaret, no we cannot. They actually oppose us on this issue.

Chris- thank you for the work you do. These sites are what keeps the world in perspective.
Counter to the left wing garbage in the msm.

Thanks for the support Skipping Girl!

Well,if no-one stands up to them of course they will do what they please!
I don`t understand why the french police do not enforce the law and stop them congregating in the streets to pray!
Okay, they may get nasty, but it has to be faced and stopped, the french have an army, don`t they!
If it were christians doing this in the street they would soon clamp down and stop them!

CB,
That is what happens in any country when Islamists grow in number. They push for more appeasement and encroach more lands/women/benefits. Unlike the people with conscience they have a herd mentality and produce one large block of vote. That is why politicians do care them more than individual like you and me.
In my childhood days in India, we used to visit my grand parents home every year. That locality was 60% muslim and 40% Hindu. Nearly 25years later when I contacted my uncle still living in that area he said Islamits started slaughtering cows on the roads on their festivals. It is still INDIA not Pakistan. COWS ARE SACRED TO HINDUS. But they don’t care. They don’t mind to kill anyone who oppose it.

Islam is like a cancer. We should treat in the very beginning, otherwise it eats us alive.

Chris – Thank you very much for great effort.

I recommend everyone of us should take a job against this evil. As far I am concerned everyday I visit all news sites and in comments section I post anti-Islam websites information.
We can do it for SPORTS sites like NHL, NFL, GOLF etc too. What are your thoughts.

Christians in this country MUST start standing up and fighting for their Faith! We will be Judged according to how we handle this situation…Will we allow this to happen? How many have written to Congress and DEMANDED that our Constitution be obeyed – by immigrants and citizens…I don’t care WHERE you come from – if you are living in this nation, you are BOUND by that Constitution…if you don’t want to obey it – live by it, then GET THE HELL OUT!

But we have NO ONE in Congress with the Moral Courage – the backbone to stand up to this idiocy! Sharia is contrary to Constitutional Law…live here, live by the Constitution or you are OUT! That is the way it should be – and unless and until we ALL stand up and insist that our Constitution be followed, it will get only worse! Read George Washington’s Farewell Address (can be found at http://www.nccs.net. STAND UP AND FIGHT – if you don’t you have no right to complain!

Chris, thank you from me, also. I am feeling overwhelmed right now. After this monumental battle, we will have to fight the Chinese!

While you may suspect the Chinese, in the end, they will prove powerful allies against Islam.
If you were to look at Islam and China side by side, you would realize that China, though not individualistic, is much more accommodating to individual expression and freedom than Islam ever dreamed of being.
In China, there is a mostly rational basis for law. Remove the ideological obsessions and ambitions for power, and China would be a rational country.

One would think Muslim women given the opportunity for a modicum of freedom would jump at the chance. They are just as brain washed as their male counterparts who live in a 7th century parallel universe. Another great one my friend, thanks for all your time J.C.

Australia is being taken over too. Don’t forget us in your fight to spread the word about this evil that is hellbent on taking over the world. Everyday, more & more boats are fully of illegals & our Government welcomes them, making becoming part of our society easier than for us already born & living here & we who love this great country of us. The face of Australia is rapidly changing & it is frightening. God bless you in your efforts to enlighten & protect those who do not & never will bow to Islam.

I just cant believe its gotten to this in america i had never understood it all till now and i have been learning alot about all of this thank u for this sight i will pass it on to others,

I am US-born living in Canada -in Ottawa, the country’s capitol one can easily spot 30% of the student population wearing burkas. We all need to do all that we can to protect the US from the same deliberate and determined infiltration. It isn’t about cultural diversity as much as it is about a “jihad” supremacy type of thinking aimed at overtaking the western hemisphere.
God Bless America!!!