As I search the Internet for articles about Islam, I also read some of the comment sections. Of course there are always people leaving comments, in an attempt to get us to back off. One that I frequently see is “What would Jesus do”. This is nothing more than an attempt to try to get us to turn the other cheek, and ignore the threat of Islam. Please do not fall for it. The other day a wrote to my friend Church Elder Louis Palme, who pulls no punches when it comes to Islam. Here is his response. 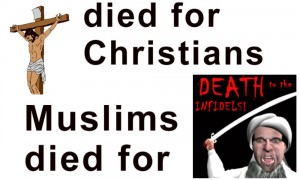 What would Jesus Do? and What Would Muhammad Do?

By Louis Palme @ Annaqed.com. Please give him a visit.

There seems to be a new approach developing in the dialogue between Christians and Muslims.  More and more, people are asking, “What Would Jesus Do?”  Those asking the question, however, are not Christians, but rather, Muslims.  They are trying to remind Christians that their intolerance of Islamic ideology is somehow un-Christian because, certainly, Jesus would seek peace, turn the other cheek, and love His enemies.

It is easy (and deceptive) to find “proof quotes” to support almost any pre-conceived agenda – whether it is a Christian agenda or a Muslim agenda.  It is also true that the Messiah (as Jesus is called in the Quran) was a advocate of peace – not the peace of willing or unwilling surrender (Surah 3:83), but the peace that is free from worry or fear. (John 14:27)  Jesus spoke kindly to people regardless of their race or their own personal sins, but that doesn’t mean he condoned their sins.  He insisted that people stop their sinning and repent. (John 8:11)

With that caution in mind, let’s consider some of the hot-button issues dividing Christians and Muslims.

What would Jesus and Muhammad do regarding: Separation of Church and State,  Personal Responsibility, Praying in Public,  Hypocrisy and Deceit, Stoning and other punishments, Killing in the Name of God,  etc.  (Since Muhammad is the “good example” of Islamic practice,  what he would do is represented either by texts from the Quran or the authoritative Hadith.)

The Purpose of their Missions:

Jesus: “The thief comes only in order to steal, kill, and destroy. I have come in order that you might have life — life in all its fullness.”  (John 10:10)

Muhammad: “I have been given five things which were not given to any one else before me. 1. Allah made me victorious by awe, (by His frightening my enemies) for a distance of one month’s journey. 2. The earth has been made for me (and for my followers) a place for praying and a thing to perform Tayammum (washing ones face and hands with soil), therefore anyone of my followers can pray wherever the time of a prayer is due. 3. The booty has been made Halal (lawful) for me yet it was not lawful for anyone else before me. 4. I have been given the right of intercession (on the Day of Resurrection). 5. Every Prophet used to be sent to his nation only but I have been sent to all mankind.”   (Bukhari, Vol. 7,  Number 331)

Jesus: [When promised the world by Satan if he would bow to him,] “Go away, Satan! The Scripture says, ‘Worship the Lord your God and serve only him.’” (Matthew 4:10)  “All those who take the sword will die by the sword.” (Matthew 26:52)

Muhammad: “I have been sent with the shortest expressions bearing the widest meanings, and I have been made victorious with terror, and while I was sleeping, the keys of the treasures of the world were brought to me and put in my hand.” (Bukhari, Vol. 4, Number 220)

Separation of Church and State:

Muhammad: Those you serve besides Allah are nothing but names which you and your fathers have devised and for which Allah has revealed not sanction. Judgment rests only with Allah. (Surah 12:40)  Allah will not let the unbelievers triumph [rule] over the faithful. (Surah 4:142)

Jesus: “Anyone who looks at a woman and wants to possess her is guilty of committing adultery with her in his heart.”  (Matthew 5:28)

Muhammad: Prophet, enjoin your wives, your daughters, and the wives of true believers to draw their veils close around them. That is more proper, so that they may be recognized and not be molested. (Surah 33:59)

Jesus: Make certain you do not perform your religious duties in public so that people will see what you do. If you do these things publicly, you will not have any reward from [God] in heaven.” (Matthew 6:1)

Muhammad: “Believers, when you are summoned to Friday [public] prayers hasten to the remembrance of God and cease your trading.”  (Surah 62:9)  [Friday was market day in Medina, so the market place was filled with shoppers.  Calling the prayer at noon on Friday would maximize the visibility of the Muslims going to  prayer. The Surah reveals that Muhammad was annoyed that some preferred commerce and merriment to public worship.]

Jesus: “How terrible for you, teachers of the Law and Pharisees! You hypocrites! You are like whitewashed tombs, which look fine on the outside but are full of bones and decaying corpses on the inside. In the same way, on the outside you appear good to everybody, but inside you are full of hypocrisy and sin.” (Matthew 23:27)

Stoning and other Punishments:

Muhammad: [When a woman repented from adultery, Muhammad allowed her to have her baby and wean him, and then he pronounced his judgment:] And she was put in a ditch up to her chest and he commanded people and they stoned her [to death]. (Muslim, Book 17, Number 4206)  Believers, retaliation is decreed for you in bloodshed. . . In retaliation you have a safeguard for your lives; perchance you will guard yourselves against evil. (Surah 2:178 – 180)

Killing in the Name of God:

Jesus: “The time will come when anyone who kills you will think that by doing this he is serving God.  People will do these things to you because they have not known either [God] or me. But I have told you this, so that when the time comes for them to do these things, you will remember what I told you.” (John 16:2-4)

Muhammad: Allah has purchased from the faithful their lives and worldly goods and in return  has promised them the Garden. They will fight for the cause of Allah, slay and be slain.  Such is the true promise which He has made them in the Torah, the Gospel, and the Quran. [This is actually NOT true.] And who is more true to his pledge than Allah? [See “Hypocrisy and Deceit,” above.] Rejoice then in the bargain you have made. (Surah 9:111)

147 comments for “What would Jesus Do? and What Would Muhammad Do?”