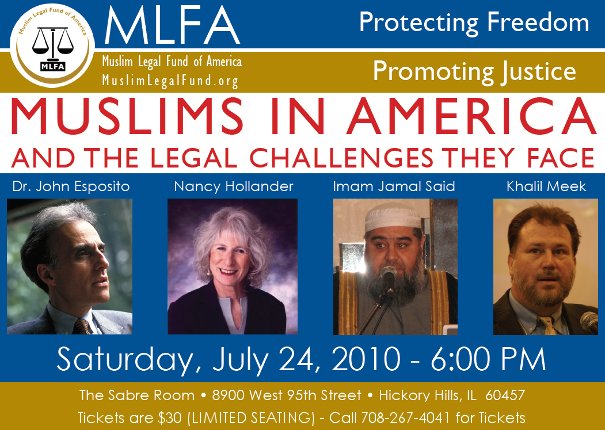 Islamic apologist Professor John Esposito who has not yet returned my email about him spreading falsehoods about Islam, and my “Georgetown Professor John Esposito a Saudi Puppet” article, will be speaking at an upcoming Islamic conference in Chicago. The conference is being held by the Muslim Legal Fund of America, which is a copy of the Council on American Islamic Relations (CAIR). Both organizations are set up for three reasons. The first is to legally (lawful jihad) advance Islam within America. The second is to spread falsehoods about Islam, and the third is to try and get people to back off from criticizing Islam. We must fight against all three.

Reserve your tickets online to see Dr. Esposito on July 24 in Chicago
(Not in Chicago? Please forward this email to someone who is.)

MUSLIMS IN AMERICA
AND THE LEGAL CHALLENGES THEY FACE

Dr. John L. Esposito is Professor of Religion and International Affairs and of Islamic Studies at Georgetown University. He is Founding Director of the Center for Muslim-Christian Understanding: History and International Affairs in the Walsh School of Foreign Service. At the College of the Holy Cross, he was Loyola Professor of Middle East Studies, Chair of the Department of Religious Studies, and Director of the Center for International Studies.

Nancy Hollander’s practice is largely devoted to criminal cases, including those involving national security issues. She argued and won a case involving religious freedom in the United States Supreme Court. Ms. Hollander also served as a consultant to the defense in a high profile terrorism case in Ireland, has assisted counsel in other international cases and represents two prisoners at Guantanamo Bay Naval Base.

Imam Jamal Said is the Imam and Director of the Mosque Foundation in Bridgeview, IL. He graduated from the University of Imam Mohammed Ben Saood in Saudi Arabia in 1980. In 1981, he immigrated to the US to teach in the Sister Clara Mohammed School in Illinois. He has served the Mosque Foundation community since 1985.

Khalil Meek is President of the Muslim Legal Fund of America, a 501(c)(3) nonprofit charitable organization that supports legal cases across the country which impact civil rights, freedoms, liberties and principles of justice in America. Mr. Meek travels to local communities to explain MLFA’s mission and the impact it has on everyone in America.

The Muslim Legal Fund of America is a 501(c)(3) nonprofit charitable organization that supports legal cases across the country which impact civil rights, freedoms, liberties and principles of justice in America. How we respond to these challenges today will shape the future of the American Muslim community.

Don’t miss this event!
There is LIMITED SEATING so reserve your tickets NOW!
http://www.mlfausa.com/july24chicago

The Six Imams (Flying While Muslim)
Pulled from a plane, arrested and interrogated for hours about political and religious beliefs.

Dr. Aafia Siddiqui
Pakistani mother of three kidnapped, tortured, shot and then tried in New York for allegedly attacking her interrogators in Afghanistan.

Islamic American Relief Agency (IARA)
Another charity shut down by executive order, denying the organization and its supporters due process, with possible political motivations.

Dr. Sami Al-Arian
Government test-case for the USA Patriot Act in which prosecutors attacked the First Amendment right to free speech and association.

This list of Muslims they have supported shows us that the Muslim Legal Fund of America is a threat to America, just as CAIR is. Like Professor Juan Cole, Esposito is clearly a traitor to Western Civilization, and he needs to be showered with some “Logan Love”. His contact information can be found HERE. I just left him a message inviting him to this site to debate Islam. Lets see if he even bothers to respond.

← What would Jesus Do? and What Would Muhammad Do?
Staten Island: Church Reverses Course and Says no to Mosque Sale! →