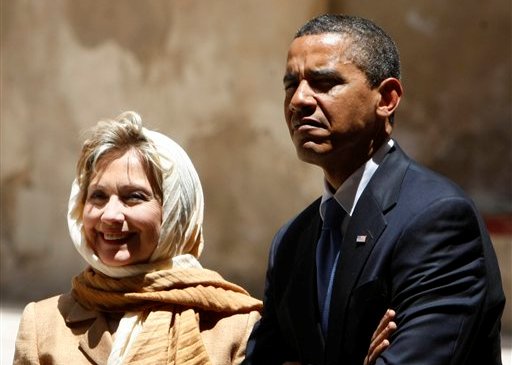 Like tag team wrestlers, Obama and Clinton are working together to bring us down, while catering to the Islamic world. The end result will be a failed effort to create a mutual respect between the Muslim and non-Muslim world. No matter what we do, the Islamic world will continue to look to dominate us. It is what their scriptures call for.

WASHINGTON: US Secretary of State Hillary Clinton on Wednesday announced business initiatives to benefit women in Muslim countries as part of a broader drive this week to promote US-Muslims economic ties.

“What we’re doing is trying to pry open those doors of opportunity for more people to walk through, more people in Muslim-majority countries and more women specifically,” Clinton told a breakfast gathering.

“Because the fact is that women still have a harder time accessing loans and equity capital investments,” Clinton said.

The chief US diplomat promised, for example, to pair women entrepreneurs in Muslim countries with US business mentors who will offer them up to six weeks of training in California’s hi-tech Silicon Valley.

The projects announced here are also part of a State Department campaign to promote women entrepreneurs internationally, underscoring Clinton’s views that bettering the lot of women will help lift countries out of war and poverty.

She announced the “Secretary’s International Fund for Women and Girls,” a public-private partnership to provide grants to non-government organizations which seek to help women make economic, social, and political gains.

The fund is designed to offer women greater economic opportunities, combat violence against them and give them greater access to education and health care.

Clinton speech at a breakfast for women entrepreneurs came after President Barack Obama on Monday laid a key plank of his strategy to mend ties with the Islamic world when he hosted a summit to boost development in Muslim nations.

The president pledged to host the meeting in a landmark speech in Cairo last June, when he also called for a “new beginning” to relations between the United States and the Muslim world which hit a low under president George W. Bush.

Also this week, Clinton announced the launch of the Global Entrepreneurship Program’s first pilot program, in Muslim-majority Egypt, coordinated by a team of entrepreneurs sponsored by the US Agency for International Development.

“We will soon launch our second program in Indonesia, and we plan to expand to a dozen countries within the next two years,” Clinton said during meetings with entrepreneurs on Tuesday. -AFP

To make matters worse, our country is falling apart, and our government is obsessed with helping Muslim countries. Priorities, priorities…