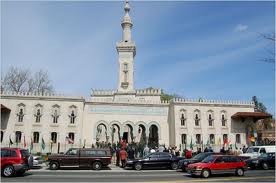 Today we are going to take a look at the Islamic Center, located at 2551 Massachusetts Avenue, N.W. Washington DC. In this post we will see another example of Muslims using our freedoms against us, while having Washington’s ear.

About the Islamic Center

the Islamic Center was officially opened in June of 1957. From its inception, it had set its goals of promoting a better understanding of Islam in the United States. It is an institution that stands ready to help anyone who may reveal a desire to embrace Islam and serves as a source of guidance for Muslims. It provides Qur’an and Islamic Literature and distribution of such publications that would create awareness and knowledge of Islamic Truth. It provides help to the needy by extending assistance (zakat) especially to families in distress. Other activities of the Islamic Center include:

Organizing language and religious classes both for adults and children

Welcoming visitors and meeeting their anticipation of gaining knowledge about Islam

Was this knowledge given?

Providing a research center equipped with an adequate library

That must be a typo, which I’ll gladly correct. It should say “The Islamic Center continually cons the US Administration….”

History of the Islamic Center

In November 1944, the idea for building a Mosque in Washington DC was born through a discussion between Mr. M. Abu Al Hawa and the former Ambassador of Egypt, Mr. Mahmood Hassan Pasha.

Soon thereafter, a handful of diplomats and American Muslims formed the Washington Mosque Foundation. The Foundation’s membership quickly grew to include representatives from every Islamic nation in the world and American citizens. They all supported the Foundation’s appeal for funds. They managed to raise enough money that enabled them to purchase the land that the Center sits on now on Washington’s “Embassy Row”. They purchased the land on April 30, 1946, and laid the cornerstone on January 11, 1949.

Talk about letting the enemy setup shop in our own backyard. It sounds like we have our very own Organization of the Islamic Conference, going on right in Washington. Also note their precise planning, on their chosen location to spread the the Islam means peace falsehood. They are not stupid.

Prof. Mario Rossi, a noted Italian architect who built several mosques in Egypt designed the building. Egypt donated a magnificent bronze chandelier and sent the specialists who wrote the Qur’anic verses adorning the mosque’s walls and ceiling. The tiles came from Turkey along with the experts to install them. The Persian rugs came from Iran, which are still in the mosque of the Center

It is very telling how they join hands, when it comes to spreading Islam. Does anyone here think that Egypt or Turkey, are going to stand with us over Islam?

Finally, with its completion, the Islamic Center’s dedication ceremony took place on June 28, 1957. Former United States President Dwight D. Eisenhower spoke for the American representatives. In his address, he praised the Islamic world’s “traditions of learning and rich culture” which have “for centuries contributed to the building of civilization.” 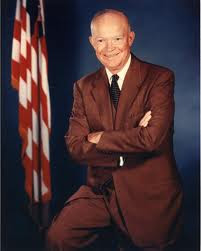 Are these actions part of that so called “rich culture”?

Or how about this one Mr. President?

Is this what President Eisenhower respected?

Lets see what else Eisenhower had to say.

He affirmed America’s founding principle of religious freedom and stated that: “America would fight with her whole strength for your right to have here your own church and worship according to your own conscience. This concept is indeed a part of America, and without that concept we would be something else than what we are.”

Speak for yourself Mr. President. Why would you fight for something that is out to destroy America? Because you were obviously uniformed on Islam, and you clearly showed that when you called a Mosque a Church. Slight difference there.

For the record, now we see just how far back Washington has been bowing to Islam. We have a lot of work to do!

Unfortunately Eisenhower was not done bowing yet.

Eisenhower concluded: “As I stand beneath these graceful arches, surrounded on every side by friends from far and near, I am convinced that our common goals are both right and promising. Faithful to the demands of justice and of brotherhood, each working according to the lights of his own conscience, our world must advance along the paths of peace.”

Their goal is destroy America, was that yours? Did you know that there is no equal justice for non-Muslims under Sharia Law? Of course not.

Now we move on and see how leaders from Islamic countries from across the world, are influencing Washington.

H. E. Roble Olhaye, Ambassador of the Republic of Djibouty- Dean Of The Diplomatic Corps In USA- Chairman Of The Board Of Directors Of The Islamic Center.

The Center is administered by a board of directors that comprises of all the ambassadors from Islamic Countries accredited to the United States of America.

The current chairman of the Board is His Exellency Roble Olhaye, Ambassador of the Republic of Djibouty to The United States.

The daily affairs of the Center are run by the executive director and his staff.

Infiltration as its finest, and the con is in overdrive…

Activities Of The Center

Shaha’da: More than 14,000 people have declared the Shaha’da and accepted the Islamic faith since the opening of the Center in 1957.

Free Education to Muslims and Non-Muslims: Teaching Arabic to adults and children. Giving seminars to those who newly embraced Islam. Lessons in Figh and Hadith Computer classes

Speaking of Islamic Law, and the Ahadith. Do you guys like this verse?

Back to their infiltration of America.

Da’wah at the Center: Large groups of visitors from all around the United States come to the Center on a daily basis . The Center is registered as a historic building in the Nation’s Capital.

Printing: The Center prints different types of brochures and booklets. A total of 50,000 brochures (seven different kinds) are printed and distributed every year to new Muslims, visitors of the Center and those asking for information on Islam.

Multimedia: The Center sends cassettes and video tapes to teach Salat (prayer), Qu’ran and the principles of Islam to individuals, institutions and those who want to know about Islam.

Lectures And Seminars: The Center receives many requests from universities, institutions, churches, schools, organizations and communities for lectures and we respond to their requests.

Like I said, they are not stupid. The Islamic Center knows exactly who to target. Now it is our job to counter them in the information war.

By the way, they are still not done putting the State Department under their bootheel.

Visits and Group Tours to the Center

Individual visitors are welcome to the Center every day during hours outside of praying times. Group visits and/or Lecture require for the respective group leaders to fill and submit the Group visit form. visits may be arranged for monday to friday, 10:30 am to 4:30 pm.

Here is a little more information from Dr Abdullah Khouj, that was on a State Deptartment website.

Abdullah M. Khouj, imam of the Islamic Center of Washington since 1984, said that since he arrived, the number of participants at prayers, held five times a day, has gone from hundreds to thousands — he estimates that 3,000 participate at Friday prayers. Khouj said they come from roughly 75 countries — they are visitors, diplomats, students and American Muslims, both immigrant and native-born.

From the Islamic Center’s services page.

Services provided at the Islamic Center

Social Services
Marriage services
More than 14,000 Muslims have been married at the Islamic Center since 1957.
For information about how to perform Islamic Marriage click here.
Marriage Counseling
Shaha’da (Conversion process)
Distribution of Zakat
Sadaqah
Free meals
Free Clothes donation
Emergency Help
Counseling Services
Funerals
Through an endowment by King Faisal and King Fahd, the Islamic Center has offered free gravesites to thousands of Muslims.
Programs
Tours
Da’wah
Islamic Studies
Lectures
Annual Bazzar (International Mother’s Day Bazaar) takes place at the Center every year on the second saturday of the month of May.

I am not sure which Islamic center is doing more damage to America. The Islamic Center of Greater Houston, or this one?

We’ll close this one out by looking at their worship page.

The Islamic Center of Washington D.C. Welcomes All To Come & Worship.
The Islamic Center traces its origins to a need, more than fifty years ago. It was created to become a place where muslims in the Washington DC metropolitan area could perform basic religious duties and prayer. It was at the funeral of an eminent muslim that the void was felt most accutely. Muslim dignitaries present at the event set out to build a mosque. That basic cornerstone – the mosque – would through various stages of its development, evolve into what is now known as the Islamic Center. In spite of the many years that have passed, the basic mission has always been to serve as a place of worship for muslims – which is still deeply rooted to the core of the Center. In line with that mandate, the mosque is open to all. All are welcome to come and worship day and night, during the regular times of the mandatory prayers. The mosque opens 30 min. before the call to Fajr (dawn) prayer and is open until one hour after the Isha (final) prayer. Then all access to the Islamic Center is restricted until it reopens its doors for the regular business activities at 10am. The Islamic Center prohibits people to stay in the mosque after closing time. The mosque is a place of worship and sleeping there is strictly forbidden. For more information about the prayer times, please visit our page on Prayer Times.

Does anyone reading know if they are actually broadcasting the call to prayer, into the streets? As for the Islamic Center, they have certainly done their part in turning our government against us in this war. We are behind the eight ball, and have to make up for lost time. It’s now or never!

← Do you Want to Preserve our Freedoms?
Coming Soon to Logan’s Warning~ Ex-Muslim Segment! →

18 comments for “The Islamic Center~ Conning Washington Since 1957”