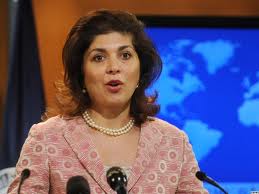 Back in August I posted some of the Tweets by Farah Pandith, Hillary’s Special Representative to Muslim Communities. Those Tweets showed us that US Military “leaders” were pandering to Islam. Today we will take a look at some of the most recent posts by Farah.

Lets see what makes her happy, and what her concerns are…

“The #UnitedStates is the #Palestinian Authority’s largest donor” says Secretary Clinton.
about 5 hours ago via txt

Am reading work of young #Muslim leaders. Inspiring. Taking on huge #global issues, project by project.
about 18 hours ago via txt

On her recent trip to Spain.

Sorry Farah, maybe Spain should let Islam run wild. How about a Mosque on every corner, would that make you happy?

Now she mentions a “great” blog.

If you go to the wordplayblog, you will an article entitled “Ingesting Shariah” Which is labeled as “Islamophobia”. Here is an excerpt, and Farah liking this says a lot.

Scare mongering about the spread of Sharia, as though it’s a common flu virus, is a regular occupation of tabloids.

‘Britain Goes Halal’, is the latest, by the Mail on Sunday, in a never-ending, long line of headlining stories that belong to such ilk. Whilst they’ve uncovered the fact that large sporting institutions like Wembley and Twickenham are serving up halal food without the public’s knowledge, they’ve managed to create a new twist to their xenophobic generating machinery. Sharia, if they have us believe, now seems to be targeting the nation through the food platter. You might want to think twice before consuming that chicken burger.

The fact is that Sharia is advancing in the UK, and 52 schools there recently went halal only. But of course the blog post did not mention this.

Now she joins hands with another Islamic conperson.

Watching #FareedZakaria on #CNN discussing if there’s growing #racism and #nativism in #America. Reminds me of 2007 discussions re:#Europe.
7:24 AM Oct 10th via web

Right Farah, because the threat of Islam is just the imagination of non-Muslims across the West. You are just too smart…

I would love for either one of them to show up here, and explain what race Islam is. They will also be shown just how “naive” we are.

Hmmm…..world-wide. She wouldn’t want Islam to dominate the world, would she? Nah….

Is it just me, but I do not see anything about America there. Just Islam and Muslims. Just like Obama and Co, this woman is no friend of America.

11 comments for “Hillary’s Gal Farah Pandith: Working for the Cause of Islam, not America”