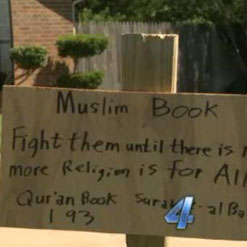 Recently I had posted about the great state of Oklahoma, preparing to ban Sharia Law. Now a civilian just like you and I, has taken it upon herself to speak the ugly truth about Islam. A Muslim moves in, and the education about Islam begins. We are forced to do the job our government, will not do. Lets do it!