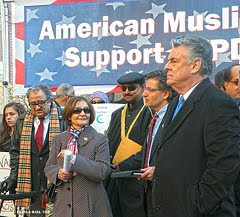 Hat tip to Pamela Hall of the Vigilant Squirrel Brigade.

The picture above was taken from this week’s ACT!/Zuhdi Jasser/Peter King’s rally in support of the NYPD. One of the “big” points of the event was that there were “moderate” Muslims attending in support of the NYPD. What is interesting about the picture is the Muslim man in the middle, with the cap and sun glasses on. He is Imam Mohammad Abdul Qayyoom, head of the Muhammadi Community Center in Jackson Heights. The Imam is petitioning to make Mohammad’s birthday a national holiday! Yes, that right! He wants America to honor his pedophile and rapist hero. I know, I know….he’s a “moderate”….good work there Zuhdi and King.

I believe that whites like to make themselves feel all warm and fuzzy inside by siding with a people they know are a threat to the advancement of humanity. There is nothing more western than hating western civilization (tyranny of guilt) This self hatred must be a Christian thing because never ever in my encounters with muslims have I noticed anything even touching regret, remorse or guilt regarding the genocides Muslims committed. No wonder they make fun of silly, sissy American liberals.

It is “whites” who are on the forefront of the fight against Islamization of America, England, Australia, and other countries.

There is nothing more Western than loving freedom.

You are describing the actions of self-hating Jews and classical liberals moreso than any Christian. You seemed to believe so too:

“fought with my muslim in laws over this one. and hate to admit that they are right – secular jews are behind the push to ruin this country. for years, I’ve been in denial but now even I see the writing on the wall. if the atheist jews have a problem with the USA then move to Israel- a country that was specially designated for Jews. why are you here if not to destroy?”
http://pjmedia.com/blog/the-secular-crusader-former-air-force-jag-looks-to-drive-all-christian-symbolism-from-military/

I guess we’re to accept the prophet Muhammad as a moderate Muslim.

Islam’s aim is to distort the battle lines and divide us! And Islam has sooo many ways!

The thought of making Mohammed’s birthday an American national holiday sickens me.

It will be very interesting to see what Brigitte Gabriel will have to say about this.

Thank you for reporting this.

ACT has no objection to continued islamic immigration, so don’t hold out for Brigitte. Instead, ask Erick Stakelbeck or Ann Barnhardt.

Meadow
Reply to  K. aka Kel

Brigitte Gabriel and her organization have proven they don’t understand the threat of Islam by promoting and using Mohammed Zudhi Jasser and other Muslims who describe themselves as “moderate” Muslims, which there is no such thing. I took my name off from her mailing list the other day. I just wonder what she will say about the petition to have Mohammed’s birthday celebrated as a national holiday, if anything at all. My guess is she’ll remain silent so as not to offend the Muslims who have and are playing her and her organization.

HAR, HAR, BUT WAS MUHAMMAD A MODERATE OR WAS HE A PERVERT OF PERVERTS?

Let’s see now. Muhammad married his daughter-in-law Zainab. That was incest in a civilized country.

Muhammad had at least 11 wives and two whores. Har, har, that makes Muhammed an adulterer in any civilized country.

Muhammad married a little girl, Aisha, when the child was six years old. Muhammad had sex with Aisha when she was 8 years and 9 months old, according to the solar calander. Actually that’s called rape in any civilized country. So was Muhammad a pervert, or was he a pervert? Certainly not to another pervert.

On another subject. By now you’ve heard that Sheriff Joe Arpaio has found that the so-called birth certificate that “President” Barack Hussein Obama presented last April 27 has been found to be fraudulent. Arpaio also discovered that Obama’s Selective Service Card is also fraudulent. This, of course, means that Obama is a genuine felon, actually The Criminal of the Century who has committed Crimes of the Century.

If we can impeach and imprison Obama, we’ll put a big dent on Islam, and its criminal activity. Muslims will not have Obama, who constantly caters to the Islamic agenda, to encourage Muslims to continue with their criminal activity.

Deserved repeating. Thanks Logan for continuing to turn up this stuff. I heard today from a reliable friend that impeachment papers are indeed being drawn up, but how far how soon the process makes it to the docket who knows…

Author
admin
Reply to  Gabriel Thy

Let’s hope for the best…

Myabe they understand but don’t care. I for one am verifying potential employees statuses.

Gabriel Thy
Reply to  Heather

I think she understands. Her Lebanon is in tatters. It’s just she’s desperately seeking allies in, as they say, all the wrong places…

A PR coup like she’s seeking would ease resistance, hatred, and ridicule from the mainstream, which is apparently where she wants to take her forces. I mean, who wants to live in fear and as a icon of ridicule all one’s life. But then, we all know what a slippery slope “social acceptance” can become.

She should know better. She’s smarter than all this non-sense.

Jasser does for the advancement of Islam what sanctions do for Iran’s development of the nuclear bomb.

Mohammads birthday a national holiday! yeah right. Muhammad is a rapist and mass murderer he deserves for all memories of him to be wiped off the earth!

[…] Aaron Klein. For those who do not know he is also a Jasser supporter. Apparently there are a lot of big names in this who are living in a false comfort zone. “Muslims” will not resolve the threat to our future […]

How do you win a war, When you Have no Answers? | Infidel News Network

[…] Just what we need….Jasser getting more politicians to believe that Islam itself is not the problem, and “moderates” are co… […]