Thankfully, as the Sharia movement becomes more transparent, within America, more and more non-Muslims are taking the initiative and are doing their part in the never-ending information war. Earlier this week, these brave non-Muslims attended the Muslim Student Association’s (MSA) 13Th annual conference at UCLA. The theme, the message of the conference, was crystal clear: WE are the enemy, and Muslims are here to take over!

TAKING BACK OUR NARRATIVE

What the Imams Told Students at the UCLA Muslim Student Assn. Conference

Overview: The Muslim Student Association (West) held its thirteenth annual conference at UCLA from January 14 to 16. Several non-Muslim volunteers attended the sessions to observe what was being said. There were around 700 young Muslims at the conference. The ratio of women to men was about 2:1. The observers were amazed at the proficiency in the English language spoken without an accent, meaning that most of the attendees were American citizens of Muslim parents. Whenever the speakers used Arabic, they would usually translate it into English, meaning that most of the audience did not understand Arabic. The choice of speakers by the MSA is as revealing as what they said. These are the “role models” for the MSA, so additional information about them was added to the biographies which were provided at the conference. All meetings and social activities including the snack tables were strictly segregated by sex. About 95 percent of the women were wearing head coverings and modest, full-length clothes, and most of the men wore beards. There was also evidence of heavy financial support. Women conferees stayed in nearby hotels, but their portion of their room fees was only $25 for the conference. The sessions were intermixed with public prayers in the courtyards of the UCLA campus. (Note: bracketed and italicized comments are clarifications and reactions added by the observers.)

Now, we will take a look how our enemies are allowed to assemble and preach against us in our own backyard.

• Time squeezes the life out of us doing unproductive things.

• It takes only 20 minutes to complete all of the required Muslim prayers each day.

• The first commandment of the Quran is to “read.”

• Things are being taught in Christian churches which aren’t true about Islam.

• When people are offended by your refusal to shake hands, etc., say you are offended [by their lack of respect for the dictates of Islam].

• The Christian condemnation of Muhammad for consummating his marriage with Aisha at age 9 is hypocritical when Mary the mother of Jesus was 12 when she was “married” to Joseph, who was also an old man. [Oops, Mary was a virgin, and the conception was via the Holy Spirit, not Joseph.]

• Don’t wait too long to get married as too many Muslim men are stuck on pornography.

• Men get carried away by their passions and lust, and the cause is women.

The second Imam is our “buddy” from Brooklyn whose Mosque blasts the call to prayers into the streets at all hours. So much for respect.

Main Session VI — What Will Your Impact Be?

Speaker: Imam Siraj Wahhaj – Born Jeffrey Kearse, former member of the Nation of Islam, Imam of the Masjid Taqwa in New York, Vice President of ISNA, and an unindicted co-conspirator in 1993 bombing of the World Trade Center.

What will you leave as a legacy? What happens after the conference? You must have a game plan to succeed. Know your opponents (infidels)! Remember you are servants of Allah and must put him first. He praised Malcolm X and encouraged reading of his book. He also praised Martin Luther King, Jr. You must connect with as many people as possible (to convert them).

Imam Wahhaj is bad enough, but this hate fest gets even more disturbing!

Speaker: Amir Abdel Malik – An African-American activist and former member of the Nation of Islam, Malik is involved with MSA West and is Imam of the Masjid Al Islam, Oakland. He has insisted that the Jews were behind the 9/11/01 attack on the World Trade Center. 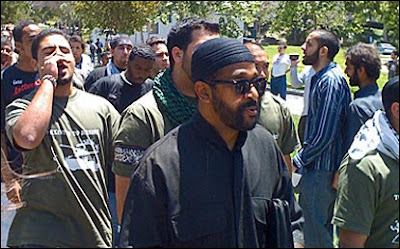 Islam will prevail over all other religions. What will your impact be? American society needs “us”, and we have a role to play. The American Empire is falling because of corrupt rich corporations that are robbing the government blind and because of the money needed for the war effort. Muslims are used as scapegoats, just as the Times Square bomber, which was fake. The government is denying people of their civil liberties, and the economy is in the hand of the corporations which are filled with corruption. Radicalization of Muslim youth is a non- issue, and it is a set-up by the government. The MSA has to take over the campuses and take the pressure off the Musajal (the enrolling, or the missionary work of the Imams).

Islamic knowledge fuels activism. Master the basics and use it as energy. The message here was so militant that I became very disturbed. There was a lot of “Allahu Akbar” being shouted throughout Amir’s presentation. At the very end, he said, “Let’s all pledge allegiance.” I looked around for a flag, and was about to stand when he said, “repeat after me”: “We’re all for Islam, Allah is the way, Jihad is the means”, etc. I was so distraught, that I couldn’t write everything down. This session was by far the most militant and extreme that I encountered during the entire weekend. It also had the largest attendance. It was reminiscent of “Deutchland uber alles”. It was very disturbing indeed and made me feel quite helpless. I might add that the presenters were both black converts.

I have said it before, and I will say it again. Islam is at war with us, and allowing the enemy to assemble and preach against us in our own backyard is beyond foolish!