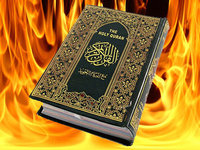 304 comments for “US Church Starts “International Burn A Koran Day””