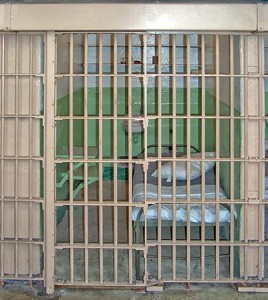 Here is we go again, our authorities try to protect us, and Muslims look to reverse policies by claiming discrimination. For the record, the Fort Hood terrorist Hasan also claimed discrimination.

The US Bureau of Prisons is being sued for allegedly discriminating against Muslims by placing them in secret prisons where communication is severely restricted. The so-called “State-side Guantanamo” facilities are the targets of the case filed against the government by the Center for Constitutional Rights.

The US Federal prison system has two facilities, referred to as Communications Management Units (CMUs), where all correspondence and telephone calls to and from the inmates are monitored. The CMUs were set up during the Bush administration when authorities discovered that some Islamic militants were able to send messages abroad from their prison cells.

According the the Bureau of Prisons (BOP), the 76 inmates housed in the isolation units are there to prevent them from furthering acts of terrorism. But civil liberties advocates say the extreme conditions in the CMUs amount to abuse and that the programme violates the inmate’s constitutional rights.

The Center for Constitutional Rights filed a lawsuit against the government on Tuesday on behalf of five current and former inmates held in CMUs. The NGO argues that the inmates were held in extreme environments, that are not warranted given the nature of the crimes for which they were convicted.

Rachel Meeropol, a staff attorney at the Center for Constitutional Rights, says the conditions at the CMU’s are inhumane:

“…prisoners are being moved without explanation, and they’re subject to extremely restrictive conditions of confinement. The conditions include a lack of any physical contact with visiting family members or friends. Even when they have young children they cannot hold them or greet them.”

A lack of process
The Center for Constitutional Rights acknowledges that there may be some inmates who need to be isolated to prevent them from aiding in terrorism. But the group points out that the government still has an obligation to set out a transparent policy that outlines the process by which inmates are selected for placement in a CMU.

Critics of the programme say this lack of process makes CMUs ripe for discrimination. And the court papers filed by the Center for Constitutional Rights state that two-thirds of the CMU inmates are Muslims, a figure that over-represents the proportion of Muslim prisoners by more than 1000 percent. Ms Meeropol says the CMU programme flies in the face of US Constitutional legal precedence:

“…because of the lack of process, these units violate the Constitutional right to procedural due process, as well as amounting to cruel and unusual punishment. We’re also claiming that the units violate indvidual substantive due process rights and First Amendment rights to freedom of association.”

Finding a solution
Bureau of Prisons director, Harley Lappin, sounded resolute when he told a US congressional budget hearing that the CMUs had been set up in response to complaints from Congress that inmates were inappropriately communicating. Still, the BOP has announced that they will post unit rules in a few weeks and those regulations will be open to public discussion for 90 days.

But prisoner rights advocates say the BOP is still not doing enough to provide public review of the CMU programme. And Ms Meeropol believes there are only two ways in which the government can fix the situation:

“The Bureau of Prisons can either implement some level of process to ensure individuals are not being moved into these secretive units for discriminatory or retaliatory reasons… or [they can] scrap the units all together. We’re asking either that the CMUs be shut down or that they brought to meet Constitutional standards.”

20 comments for “US Prison System Sued for Isolating Muslims”