In the on going worldwide persecution of Christianity, the Shrine of Our Lady of Fatima has been vandalized with pro-Islamic graffiti. Don’t worry guys, I am sure that the Vatican is all over this…. 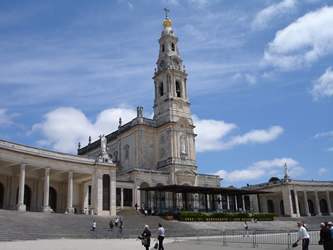 FATIMA, Portugal, JAN. 12, 2010 (Zenit.org).-
The church of the Holy Trinity and four statues at the shrine of Our Lady of Fatima were vandalized early Sunday morning.

In a press release Monday, officials from the shrine announced that in the early hours of Sunday morning, four statutes on the sides of the church as well as the church itself were painted with graffiti.

According to the statement from shrine officials, “the difficult work of cleaning” is under way.

The communiqué added: “In reporting what has happened and without knowing who has done this, the shrine [officials] confirm [our] sadness and assure that the issue has been reported to the police.”