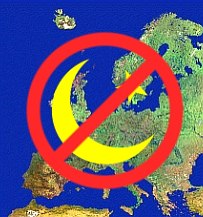 I was not planning on doing a part II to my “Europe: The Rise of the Anti-Islam Campaign!” article, but some of our teammates send in some more encouraging videos. The tide in the West is clearly turning against Islam!

Switzerland: Back in late 2009 the Swiss banned minarets, an Islamic sign of domiance. But doing so was not nearly enough to win this war,and thankfully not all non-Muslim politicians have their head in the sand. In the video below Swiss Parliament Member Oskar Freysing, gives a firey speech over the West committing a slow suicide by appeasing Islam.

The reaction by the audience was amazing!

UK: While our friends in the UK have been hit hard by Islam, there is hope. One sign of hope is Paul Weston, Chairman of the British Freedom Party. Mr. Weston reminds my of the Netherland’s Great Geert Wilders. Both do not play suicidal politically correct games, and both are calling for an end to Muslim immigration. Weston recently wrote this excellent letter to the David Cameron, Prime Minister of the UK.

Whether your recent bizarre policy decisions are driven by a fear of Islam or a woeful lack of Islamic understanding remains unclear, but to most impartial observers it would appear you have crossed the loyalty line and are now officially endorsing sharia law in Britain.

I would remind you that as our Prime Minister your primary duty is to put the interests of your country and your own people before the interests of a foreign people or ideology. I am of course talking about Islam here, more specifically sharia law, which is making rapid progress in Britain and the West. It is both astonishing and chilling that what was formerly considered haraam (forbidden under sharia law) only in Islamic countries is now equally considered haraam in Britain.

A Christian travelling to Saudi Arabia cannot take a bible or a cross into that country, nor could he display pictures or caricatures of the Prophet Mohammed. I have no particular problem with this — when in Rome etc. — but I do have a problem, to put it mildly, when my own government appears intent on importing the political ideology of sharia into my own country.

Two recent news stories suggest Britain is not just adopting a policy of appeasement toward sharia, but is already a de-facto sharia state. Firstly, your government is quite incredibly arguing that British Christians should not be allowed to appeal against a ban which outlaws the wearing of crosses in the workplace, and secondly that an Englishman, Darren Conway, has been jailed for twelve months after being found guilty of “religiously aggravated harassment.”

The MSM seems reluctant to inform us how this new thought-crime of religiously aggravated harassment was contravened, but posters displayed by Conway in the windows of his home are rumoured to link the sexual consummation of the marriage between the Prophet Mohammed and his nine year old bride Aisha with the casual disregard Muslims exhibit toward the rape and grooming of underage English girls in Britain’s northern towns and cities.

I am not going to suggest that displaying such posters is the most diplomatic way of drawing a comparison between Mohammed’ sexual predilections and the ongoing Muslim rape of English girls, but the only point to be made is that the jailing of Darren Conway should not be possible in a non-Islamic country, and would simply not have been possible in Britain ten years ago.

What we are witnessing here, along with the outlawing of Christian crosses, is the rule of sharia in what is still termed a Christian country. You, Mr Cameron, and Britain’s traitor class in government and the media have prostrated yourselves before the onslaught of a fanatical, murderous and resurgent Islam, even as you publicly proclaim Islam to be a religion of peace.

Successive British governments (along with the BBC) have portrayed Islamic terrorists as deluded fanatics who kill for no better reason than to kill — as if the fact that they are brutal means they are insane. Britain’s ruling class deliberately adopts the disingenuous narrative that Islamic terrorists couldn’t possibly be accurately representing a well-grounded interpretation of Islam, and must therefore be ‘perverting’ or ‘hijacking’ Islam, or indeed are “betraying the true Islam”.

But as Andrew McCarthy notes, there is logic to terrorism. It is jihad, the purpose of which is to implement, spread, defend or vindicate sharia, the Muslim legal code. Sharia is the necessary precondition to Islamicizing a society. Once you realize that, you quickly realize that the same sharia-driven campaign can be waged, and is being waged, by non-violent means, and that the violent and non-violent methods are inextricably linked.

In her book The Dhimmi Bat Ye’or writes:

The jihad is a global conception that divides the peoples of the world into two irreconcilable camps: that of the dar al-Harb, the “Territory of War,” which covers those regions controlled by the infidels; and the dar al-Islam, “the Territory of Islam,” the Muslim homeland where Islamic law reigns. The jihad is the normal and permanent state of war between the Muslims and the dar al-Harb, a war that can only end with the final domination over unbelievers and the absolute supremacy of Islam throughout the world.

To further your education, Mr Cameron, you must understand that wars are fought between rival tribes, races and religions not in order to sate mankind’s desire for violence but as a means to an end, with the end being one thing and one thing only — political control over the defeated people. When you act against Britain’s Christians in the way that you now do, and lock up Englishmen who dare to portray Mohammed in posters, you are in effect enforcing sharia law against traditional Britain.

You are therefore not representing your country and your people; you are representing the ideology and law of sharia, an alien political system with a history of absolute enmity against the West, and which currently seeks to dismantle the liberal democracy of Great Britain over which you preside. You are in short, exhibiting the behaviour of a traitor.

It is possible I am being somewhat harsh on you Mr Cameron. It is possible your education and professional life to date leaves you ill-equipped to absorb the realities of Islamic imperialism, but ignorance about a matter of such profound importance is not a legitimate defence. Perhaps you think the Islamic threat is blown out of all proportion by “right-wing extremists”, but the threat is more than real: it is overpoweringly the single biggest issue of not just our time, but of all time.

You may not want to admit that Islam is at war with the West, but Islam fully realises it is engaged in a physical and ideological war against us. Until such time as you accept this reality then it will be a war we can only lose. How can we mount a defence when the traitor class refuse to even acknowledge we are under threat?

The rise of Tommy Robinson and the English Defence League signify the initial stage of an inevitable religious civil war in Britain. It is the working man of England who must face the reality of living in our rapidly increasing Islamic areas, but demographics suggest the middle-classes will also face Islamic reality in the very near future. Old Etonians, Oxbridge graduates and the champagne socialists (who all choose to live well away from the deliberately imported multicultural hell-holes created by the traitor class) have assured a truly terrible future for Britain and its betrayed indigenous people.

Western politicians such as yourself, Mr Cameron, have operated in a liberal democracy for so long you have forgotten the law of the jungle and are thus culturally unable to descend to its level. Islam, with its refusal to accept democratic man-made laws; its openly discriminatory attitude toward non-Muslims, its propensity for intolerant violence and its tribal/political/religious ideology is the law of the jungle, and the Savile Row suited and politically correct Western politicians — all reared on a diet of non-discrimination and tolerance — are thus rendered defenceless before it.

I would be glad to hear a coherent argument against the content of this open letter, Mr Cameron, but fully understand that your vocal appeasement of resurgent Islam makes such a response more than a little unlikely. This is a shame, because I am sure I speak for many millions of British people who find your official endorsement of sharia law in Britain baffling in the extreme.

Weston also has a 20 point plan that would save the UK from Islam!

4. Halt any further non-Western immigration for a period of five years.

6. Abolish all multicultural and equality quangos.

7. Halt and turn back all aspects of the Islamisation of Britain, including Sharia finance.

8. Drastically reduce crime – criminals should fear the consequences of their behaviour.

9. Repair the damage wreaked by the progressive educational establishment.

10. Promote British values and assimilation, rather than multiculturalism and division.

12. Diminish the public sector and government interference in the private sector.

13. Withdraw troops from all areas where we are not directly threatened.

14. Cancel foreign aid to countries which do not deserve or need it.

15. End welfare payments to immigrants; they must pay for their housing and children.

16. Ensure no elderly person lives in fear, and can afford both heat and food in the winter.

18. Promote morality, marriage, the family, the community and the nation state.

19. Allow pubs the freedom of operating as smoking or non-smoking establishments.

20. Live by Christianity’s Golden Rule: “Do unto others as thou wouldst be done by.”

Then there are the foot soldiers of the English Defence League. Lead by true Brit, Tommy Robinson.

Because of Muslim immigration, I would not be surprised if civil wars break out across the West. So we need to support politicians who will end their immigration. Things might get ugly (not a call for violence), but Islam in our lands will be defeated!

← Europe: The Rise of the Anti-Islam Campaign!
American Freedom Law Center to Obama: Islam is the Enemy! →

38 comments for “Europe: The Rise of the Anti-Islam Campaign! Part II”