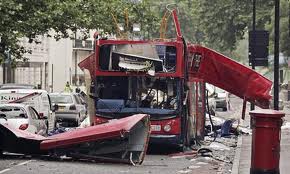 On the 6Th anniversary of the London Islamic terrorist attacks, IslamoPUNK Anjem Choudary has stated there will be more 7/7’s and 911’s, if the troops are not removed from Islamic countries. Anjem implies there will be peace if they are removed. What Anjem fails to mention is that Islam calls for perpetual war.

Come to America and TRY and force Islamic rule on us IslamoPUNK. We eagerly await you…

← Australia: Muslim Conference Calls for Sharia Whether we Like it or not! ~ Video
Hannity Guest Mike Ghouse Responds to Logan’s Warning with ANOTHER IslamoCON! →