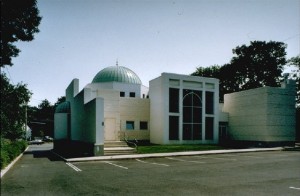 The Islamic Center of Long Island (ICLI), which is located at 835 Brush Hollow Road in Westbury, is planning to expand into an Islamic megacenter by June of 2011. 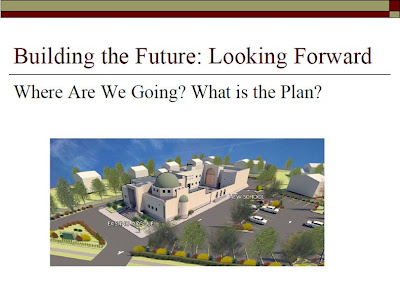 Back in May of 2009, Mayor Cavallaro of Westbury had this to say on the issue:

The mayor stated that there is a significant parking issue but that the mosque, which owns several houses in the immediate area, plans to remove the homes to establish parking. The Islamic Center of Long Island was preparing to go before the proper Village officials and boards (trustees, planning, and zoning) to obtain variances.

Cavallaro discussed how the Village has the obligation to protect the neighbors. He talked about how the Islamic Center needs to be more considerate of the neighborhood, but that, additionally, the neighbors should work with the Center. In the past, fines were placed on several pieces of properties that the Mosque owns. The mayor, along with Trustee Steve Corte and Senior Building Inspector Bill Mello, continually monitors the codes to ensure that they are enforced. However, according to Cavallaro, religious institutions are given a bit more latitude than residences are afforded. 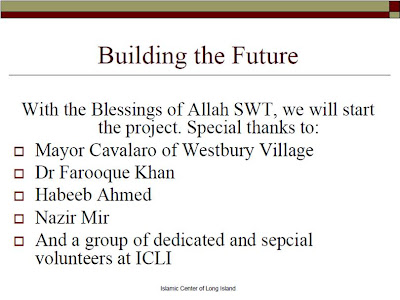 The idea of the Islamic Center of Long Island grew out of the concerns of a small group of Muslim families, mostly immigrants who settled in Nassau County in the early ’70s. The need to preserve their religious identity and cultural heritage, along with the desire to educate their children in Islamic principles, drew these families together often on weekends.

As with the rest of my Mosques in America articles, there is no mention of assimilating into American culture.

Initially, a small group comprised of 10-15 children started meeting on weekends. Meetings were initially held in a nursery school facility in Hempstead, L.I., in basement of private homes, rented church facilities that were often very accommodating to the needs of these “new” immigrants. The Advent Church in Westbury, run by Quaker Foundation, was particularly accommodating. The assembled groups of students were instructed by parents who volunteered their time. Over a period of time, through word of mouth, more families started to get together, and the group realized the need for a permanent home.

It is a sad commentary that many churches ignore the plight of their Christian brothers across the Islamic world yet bend over backwards to please Muslims.

For any Christians, Jews, or other non-Muslims who are new to the subject, here is a brief, basic lesson in Islam:

The bottom line is that Islam calls for the dominance of Christians and Jews, and appeasemment only shows weakness to the Muslims. We will NOT win this war by dealing from a position of weakness!

Here is where the Muslims start talking out of both sides of their mouth:

To Serve and engage Muslims by promoting the progressive values and teaching of Islam and to advocate inter-faith harmony in a multicultural environment in accordance with the Holy Qur’an and Sunnah.

For those new to the subject, the part about “inter-faith harmony” probably sounds appealing. But we need to pay close attention to the words that FOLLOW those: it is their way or no way at all!

Let’s take a look at “inter-faith harmony”, Mohammad-style. (I am not implying that the Muslims at the ICLI are violent).

Muslim Hadith Book 019, Number 4292:
Ibn ‘Aun reported: I wrote to Nafi’ inquiring from him whether it was necessary to extend (to the disbelievers) an invitation to accept (Islam) before m”. ing them in fight. He wrote (in reply) to me that it was necessary in the early days of Islam. The Messenger of Allah (may peace be upon him) made a raid upon Banu Mustaliq while they were unaware and their cattle were having a drink at the water. He killed those who fought and imprisoned others. On that very day, he captured Juwairiya bint al-Harith. Nafi’ said that this tradition was related to him by Abdullah b. Umar who (himself) was among the raiding troops.

Back to the double-talk!

To be a center of excellence for developing and sustaining a vibrant Islamic community and a nurturing environment for the society at large.

Be warned, Christians! Once that Islamic community gets strong enough, the
multicultural environment will slowly come to an end.

Assalaamu Alaikum Wa Rahmatullah (Peace and blessings of God upon you)

The Quran’s message is so inclusive and pluralistic towards all, humanity and it is up to us, as American Muslims, to bring the message to our fellow Americans and to dispel the myriad stereotypes and prejudices that dominate the media about Muslims.

Like I said, it is all-inclusive. It calls for the dominance of non-Muslims. Why do Muslims continually fail to mention that tenet?!

Assalamu alaykum wa rahmatullahi wa barakatuh.
It is my pleasure to welcome the Islamic Center of Long Island (ICLI) community and all the friends of ICLI from the larger community at our annual fund raising event. We had a nice, productive year and we’re all looking forward to 2010.

Two major capital projects are underway at Islamic Center of Long Island. I am happy to inform you that we have acquired an adjacent property to mosque on Talbot Drive.

My thanks to all who contributed toward the purchase of this house and a request to pitch in more as the house is not fully paid for at this time. The second major project is the expansion of the mosque itself. Insha Allah we will be building a state of the art building of 18,000 square feet. This will give room for a bigger and better ICLI office, classroom space, library, conference rooms, and an expanded preschool. This will also give much needed parking. Insha Allah we will have almost 100 parking spots after the project is done. We have had a public hearing for variance for this project and by the time you read this message, there should be some response from the Village of Westbury.

This year we had the historic visit by the Grand Mufti of al-Azhar, Dr. Shaykh Ali Gomaa.

Now the Mosque has shown us its true colors. A little background info. on Gomaa:

CAIRO—“Maybe we just need to buy CNN,” says Sheik Ali Gomaa, more than a hint of exasperation creeping into his voice. After taking more than an hour to explain to yet another western journalist why a traditional conception of sharia law—along with knowledge of Islamic jurisprudence—is the best antidote to Islamic extremism, the grand mufti of Egypt is not able to disguise his frustration. Why, he wonders, does the West still not recognize who the moderate Muslims are, much less heed what they are trying to say? Shrugging his shoulders, he answers his own question: “The western media has paid no attention.”

Not only is he pro-Sharia, but Gomaa seemingly will say anything to make Islam sound harmless.

Something to be aware of is that Islam is capable of thriving in every age and of building bridges with all civilizations. This is affirmed by history and all Islamic sources.

Here, we see a perfect example of Islamic deception.

Who is eligible?
The Qur’an classifies who is eligible for Zakat funds: “Zakat is for the poor, and the needy and those who are employed to administer and collect it, and the new converts, and for those who are in bondage, and in debt and ser-? vice of the cause of Allah and for wayfarers, a duty ordained by Allah, and Allah is the All-Knowing, the Wise.” (Surah Al-?Tauba: 60)

These eight categories of people are described in greater detail below:
Miskins (the poor) – people who have no means for food, clothing & shelter Fuqara (the needy) – people who have some means, but not enough for their needs Aamileen (employed to collect) – people who help collect and distribute Zakat Muallafat-?ul-?Qulub (new converts) – efforts to attract hearts of new Muslims or preventing harm of non- Muslims residing in an Islamic state Fir-?riqab (those in bondage) ␣ originally intended to help free slaves, but can extend to providing relief
to oppressed people Al-?Gharimeen (those in debt) ␣ people who took on debt to finance personal and social needs, but are unable to repay the debt borrowed Fi Sabilillah (cause of Allah) ␣ efforts that lead to promoting Islam and other charitable purposes Ibn-?us-?Sabil (wayfarers)people who while traveling require financial support

Take a look at the words in bold. They comprise the seventh category of those eligible for Zakat, and that is where the deception enters. Fi Sahilillah is usually used in the following sentence: “Jihad fi sabilliah”, Jihad in Allah’s cause or Allah’s path. But, of course, ISLI does not describe what the “efforts” and “charitable purposes” are. So, I’ll glady do it for them!

From the Reliance of Traveller A Classical Manual of Islamic Law. Please keep in mind that ROE is approved by Al-Azhar. Also remember that the Grand Mufti of al-Azhar, Dr. Shaykh Ali Gomaa, visited this Mosque last year.

WHY would the ICLI fail to mention all of that?