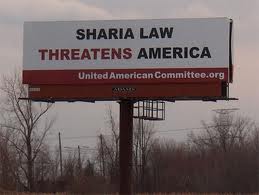 It may be only a small portion of the Republican Party, but this is not the first time that GOP members have questioned how this war is being fought. Up until recently we barely heard a word about the threat of Sharia, but the sleeping giant of America is awakening. Keep up the good work guys, and never let up. Together we can ensure our families future generations, that this will never be an Islamic country!

Release of the Report of Team B II: Shariah: the Threat to America

“Team B II”, some of the country’s most accomplished civilian and military national security professionals, recently released a major new national security assessment examining the threat posed by Shariah to America. The 177-page report entitled, Shariah: The Threat to America, offers a compelling and comprehensive second opinion on the dominant threat of our time: the totalitarian legal-political-military doctrine known within Islam as Shariah. This authoritative study, reflecting six months of intensive analysis and drafting, takes its inspiration from the original 1976 “Team B” report that challenged the then-prevailing U.S. government intelligence estimates about the intentions and offensive capabilities of the Soviet Union during a period of “détente” (easing of tensions).

Today the United States faces what is, if anything, an even more insidious ideological threat: the totalitarian socio-political doctrine that Islam calls Shariah. Shariah Law is the comprehensive Islamic law, which incorporates both civil and criminal justice as well as regulating individual conduct both personal and moral.

The Team B II report details a comprehensive discussion of Shariah and Jihad, Shariah’s security relevant attributes, Shariah’s incompatibility with the U.S. Constitution, the movement of the Muslim Brotherhood worldwide – with a special emphasis on the United States – and most importantly, U.S. leadership failures in the face of Shariah encroachment.

As Members of Congress, we take an oath of office that we will “support and defend the Constitution of the United States against all enemies, foreign and domestic.” Because of this oath, we have a sworn duty to educate ourselves about the threats to our Constitution and way of life. Thus far, both Congress and executive agencies charged with defending this country have failed to grasp the seriousness of this matter.

The creeping influence of Shariah law certainly meets the criteria of such a threat, as it threatens to subvert American law and the Constitution. Shariah does not primarily seek to harm America through direct physical force; instead, it seeks to slowly replace American ideals with a radical ideology, placing itself above American law. Shariah rejects fundamental principles that are the bedrock of American law and society, specifically the rights of the governed to participate in the system of law and the very idea of a republican democracy. The American ideals of Equal Treatment under the Law and Individual Liberty are not only lost under Shariah Law, but specifically denounced. In order to “support and defend the Constitution of the United States,” we must recognize and educate ourselves about whom and what are existential threats to the American way of life.

The full report Shariah: The Threat to America will be available as a soft cover book in October 2010, and can be downloaded from the website ShariaTheThreat.org.

← The Fight Against Islamic Expansionism Continues!
Strange Email I Received the Other day~ UPDATED →

37 comments for “GOP Team: Sharia is a Threat to America”