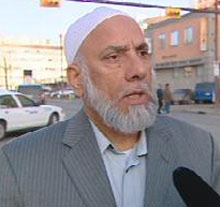 Last month I challenged Alan Colmes to a debate on Islam, and at the end of the article I had posted the following statement.

We can now add him to the following list of these other known Islamic excuse makers, that have refused to debate me on Islam.

Ebrahim Moosa, associate professor of religion at Duke, Charles Kurzman, professor of sociology at UNC, and David Schanzer, an associate professor in Duke’s Sanford School of Public Policy and director of the Triangle Center on Terrorism and Homeland Security. Others being Professor Juan Cole, and Canadian Imam Syed Soharwardy. Apparently the truth does not matter, these days.

In the comment section of the Colmes post, Jew hating Imam Syed Soharwardy left the following comments. (I meant to write up this article a few weeks ago, but I was very busy getting ready to move.)

Syed Soharwardy on June 7, 2010 at 4:10 pm
Hello, I do not remember when you challenged me for a debate on Islam. Can you please send me your invitation? I do not have any record of your invitation or challege. Lets debate. When are you availble? Thanks

The truth is Syed was the head Imam on a fatwa against “terrorism”, that was designed to fool non-Muslims. This following excerpt was taken from the fawta.

This is obviously an lie, and the day I exposed his fake fatwa I emailed the link to him. Around the same time a friend of mine had also emailed Syed. Syed reponded to him, but not mine. Of course the Imam cannot help himself, and lies some more. He sticks with his con.

The Constitution of USA and the teachings of Qur’an are absolutely in sink. No difference what so ever.

His statement would almost be comical if this were not such a serious issue. To expose his deceitfulness I posted just a few examples of the differences between the US Constitution, and Islam.

Excuse me Syed, but this sounds pretty cruel to me.

YUSUFALI: As to the thief, Male or female, cut off his or her hands: a punishment by way of example, from Allah, for their crime: and Allah is Exalted in power.

YUSUFALI: Ladies said in the City: “The wife of the (great) ‘Aziz is seeking to seduce her slave from his (true) self: Truly hath he inspired her with violent love: we see she is evidently going astray.”

After Syed left his comments on my site, I sent him the following email.

Mr. Soharwardy Monday, June 7, 2010 11:52 PM
From: “Christopher Logan”
To: soharwardy@shaw.ca
Hello,
I saw your comments on my site today. In the past a friend and I had emailed you at the time of your fatwa. You responded to his, and not mine. At the time you had made the following statement.

This statement is just not accurate, and I exposed it HERE.

When you can prove me wrong please let me know.

Here is his first email back, and the spin begins. See how he continually ducks my statement about the US Constitution and Islam.

Again, you have not invited me for a debate as you wrote on your website. I invite you for a debate face to face. I will answer every question that you may have about Islam and the question that you wrote in your email. Then I will ask you questions and you will should answer those questions. This is what I call debate. If you are ready for the real debate, please let me know when are you available. I will arrange my schedule based upon your convenience. I want to enjoy our debate. Writing on blogs and hiding behind emails is no fun. We will video tape the debate and then you can post it on your website.

I need to work and spend time with my family. I do not have time to respond to blogs and emails. However, I can spare one day for you and respond to your questions. The face to face debate will expose both us and people will be able to decide who is right and who is wrong. Looking forward to your acceptance of by invitation for a face to face debate. Thanks

In other words you cannot refute what I stated, and you have lied about the Islam and the Constitution having no contradictions. I don’t live in Canada, and you not willing to answer the questions shows the truth. Just another lying Imam.

Even though Syed just said that he has no time to respond to respond to emails, he continues to respond. But he never refutes my statements about Islam, and I am not willing to fly to Canada where Syed can try and have me arrested for “hate speech”.

I just do not care for lying Imams, as they are a major threat to Western Civilization. So once again, I get right to the point.

RE: Mr. Soharwardy Tuesday, June 8, 2010 11:25 PM
From: “Christopher Logan”
To: “Syed Soharwardy”
Syed,
How you lie.
Lying Imam US Constitution and the Koran the Same.

Have a good day,

It did not take much to expose the lying Imams hateful nature. Meanwhile he still avoids the debate.

Your email shows how hateful you are? That is the reason I wanted to see face to face a hatemonger who would not tolerate the tolerance of Islam. Wherever, you live, we can still talk. We can still record our voices and let the people listen our debate. Thanks

The tolerance of Islam? That is a good one Imam you are a classic Islamic liar, just like your religion encourages you to be.

Shame on you. You backed off from the debate and you lie about me. If you have any guts lets debate face to face. You just hiding behind your hateful writings and emails. You are not a man. You don’t have courage. Hatemongers like yourself can not face the truth. I am still willing to debate with you, if you have the courage. Thanks

Ummm…I am still waiting for you to refute just one thing that I said about Islam.

Now I hit Syed with some more facts,

RE: Mr. Soharwardy Wednesday, June 9, 2010 3:52 AM
From: “Christopher Logan”
To: “Syed Soharwardy”
No surprise here, you cannot refute what stated. Using your “logic”, the Jews were
hatemongers for speaking out against Nazism. Islamic Law discriminates against women, non-Muslims, apostates, and homosexuals. That is not tolerance. Speaking of tolerance, I want build a mega-Church in the Middle East, please let me which country.

Your con will not work here Syed

RE: Mr. Soharwardy Wednesday, June 9, 2010 8:55 AM
From: “Christopher Logan”
To: “Syed Soharwardy”
Listen Imam I use my real name and hide from no man. I will never submit Islam. You are the coward who is playing word games. If you want to silence me, play like Mohammad and try and kill me. I invite you….coward.

At this point the lying Imam ran away with his tail between his legs. No surprise though…

Now I will email him this link.

← Calvary Baptist Church: We do not Want Islam Spreading Here
What would Jesus Do? and What Would Muhammad Do? →

31 comments for “Lying Imam Responds to Logans Warning, Lies Some More Then Runs for Cover”