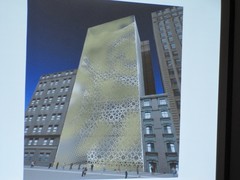 First of all, this project is complete sign of disrespect by Muslims, but they are only concerned with advancing Islam. They can preach the Islam is peaceful line, all they want. It is just not true. Secondly, the board members that unanimously approved the Islamic center, are obviously uninformed on Islam. I guess that it would of been too much trouble for them, to do some actual research on the issue. We have to continue to educate, or Muslims will continue to destroy the West from within. It is up to us!
(Just look at how this building, would dominate the block.)

Mosque to Open Two Blocks From World Trade Center
May 5, 2010

The downtown community has mixed feelings about plans for an Islamic center near Ground Zero, but Community Board 1 approved the plan Wednesday night.

The old Burlington Coat Factory building on Park Place has sat shuttered and empty since the landing gear from a hijacked plane crashed through the roof on 9/11.

Now, a Muslim group hopes to build a mosque and cultural center there, replacing what they see as the worst of Islam with the best.

“We have a vision that is opposite the vision of the extremists,” said Daisy Khan, executive director of the Cordoba Initiative, the group behind the center. “We want to be a driving force for the rebuilding of Lower Manhattan.”

“Finally we can get that ugly space taken care of,” said Pat Moore, a member of the committee who lives nearby.

A preliminary rendering of the 13-story Cordoba House on Park Place.But other members of the community, who did not attend Wednesday’s meeting, want the mosque to find a different home.

“It doesn’t belong down here,” said Rosemary Cain, whose firefighter son was killed on 9/11. “It makes me sick to think the city would allow such a thing.”

While Cain acknowledged that “not every person who is Muslim is a terrorist,” she thinks the Muslim community as a whole never sufficiently declaimed the attacks.

John Schmidt, 29, a construction worker who is rebuilding the World Trade Center, also got angry when he heard about the plans.

“No way,” he said. “Muslims bombed the towers. Why would they put a mosque next to the Freedom Tower?”

Khan envisions the $100 million, 100,000-square-foot Cordoba House as much more than a mosque: She wants it to be a gathering place for the entire downtown community, including residents, workers and tourists, whether they are Muslim or not.

The 13-story center, which could open as soon as 2013 at 45 Park Place, will include a 500-seat auditorium, a basketball court, a swimming pool and a kitchen for cooking classes. Khan hopes to host interfaith conferences and panels along with more lighthearted events like a Muslim Idol talent competition.

Iqbal Hossain Chowdhury, 42, who runs a newsstand on Park Place, said the center would provide much-needed education for Muslims as well as non-Muslims.

“People read the Koran and they don’t know the meaning,” said Chowdhury, who is Muslim. “It is good for them to learn — to learn is best.”

Matt Migeal, 39, who was selling 9/11 photo books in front of the World Trade Center on Wednesday, also thought it was good for the mosque to move in.

“This didn’t happen because of Muslim people,” Migeal said, gesturing toward the site. “Terrorism and Islam have nothing to do [with each other].”

The Cordoba Initiative already runs a mosque on West Broadway and started holding weekly services in the new Park Place space last year. As the services grow, they could attract up to 2,000 people, Khan said.

The Cordoba Initiative is already working with the NYPD on security.

Khan said she has heard very little criticism of the center so far, though she added that Saturday’s attempted Times Square bombing didn’t help.

“Events like [Times Square] always set us back,” Khan said. “Leaders have to push back in the other direction, and that’s what we’re trying to do.”

Hey Matt, the Islamic scriptures clearly prove you wrong. Please stop talking about what you do not know. Thanks!