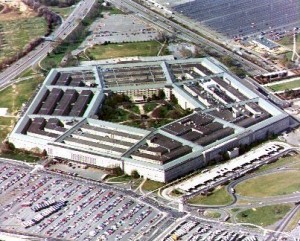 While others might not want to say it, I will. The Pentagon’s whitewashing of the Islamic factor in the Fort Hood shooting, was just pathetic, and their policy that some form “moderate” Islam is coming to the rescue is a failure. It is the same policy that the UK is pursuing, and it does not work there either. Thankfully over a dozen Republicans are challenging the Pentagon, and their relationship with their so called “moderate” Muslim advisors. This article shows us just how little research the Pentagon has actually done on their own on Islam. They just want to be blindly spoon fed, what “moderate” Muslims are feeding them. It is time for them to grab the bull by the horns, do their own research, and recognize what enemy is. That enemy is Islam itself.

U.S. torn over whether some Islamists offer insight or pose threat

Sunday, February 7, 2010
By BROOKS EGERTON / The Dallas Morning News
After the worst military base massacre in U.S. history, officials acknowledged that they failed to “connect the dots” – the shooter had been corresponding with an imam tied to al-Qaeda and had condemned the wars in Iraq and Afghanistan as a war against Islam.

But Fort Hood gunman Maj. Nidal Malik Hasan wasn’t the only one working on a Texas Army base the day of the shooting who had links to radical Islamists.

At Fort Bliss, an experienced military trainer was teaching soldiers about his Muslim faith. He, too, had denounced government counterterrorism efforts, and public records show he and some of his closest associates had ties to terrorism suspects.

But when The Dallas Morning News first inquired about the instructor, Louay Safi, military officials praised him. Only later did they say that Safi had been suspended from working on military bases pending a continuing criminal inquiry.

The Safi affair reveals the deep divisions within the U.S. government over how to combat terrorism and over what constitutes moderate Islam.

Some believe insight into Islamist thinking can be gained only by engaging a wide range of people in North America’s close-knit Muslim community, where leaders may well have ties to extremists – ties that do not necessarily signal alliances or support. Others argue that engagement should be limited or shunned to avoid legitimizing radicals or embarrassing the government.

Safi is a senior official of the Islamic Society of North America, the country’s largest Muslim organization. ISNA has been consulted for years by Washington and is described as a partner in the fight against terrorism. In addition to serving as ISNA’s communications director, Safi runs its program certifying Muslim chaplains for work in the U.S. military and prison system. He publicly denounces terrorism and advocates peace.

Safi was also named by government prosecutors as an unindicted co-conspirator in one terrorism case in 2005. His last two employers were implicated in other government terrorism investigations while he worked for them. He was never charged, nor included among the targets of those investigations.

But Safi has called the widespread raids on Muslim organizations after 9/11 “a campaign against Islam” – a term that 9/11 Commission director Philip Zelikow says is part of “the jihadi narrative.”

Safi has also complained that Muslims are treated differently from Christians and Jews when they do wrong. They are unfairly identified by and questioned about their religion, he says, treatment that can lead to isolation and aggression.

“The extremist ideology responsible for violent outbursts is often rooted in the systematic demonization of marginalized groups,” Safi said in an Internet posting after the Fort Hood shooting.

Some view Safi’s rhetoric as incendiary.

Zuhdi Jasser is a Navy veteran who founded the American Islamic Forum for Democracy and has spoken publicly about the dangers of politicizing Islam. He said Safi’s “separatist mindset of the world against Muslims” is the “mindset that created Hasan.”

Safi would not answer most questions from The News. But in a brief interview, he said the legal assaults on him and his associates even as Washington sought their advice represented the government’s divided approach to Islam.

“There are those who are prejudiced and would like to deny Muslims their rightful place in this country,” Safi said, “and there are people who are more open-minded. It’s as simple as that.”

Safi’s case, however, is anything but simple. It illustrates not only the divisions in dealing with Islam but also the difficulty in knowing which dots to connect.

“You have a schizophrenic government and a schizophrenic institution,” Zelikow said, referring to ISNA. “The schizophrenia cuts right into how the government views the whole Fort Hood affair. We don’t know whether to treat him [Hasan] as part of an international conspiracy or as a lone wolf who happened to have gotten solace from a radical imam.”

Safi, a 54-year-old native of Syria, is a military subcontractor who has lectured on Islam for the Army since 2005. His relationship with the Pentagon began a year earlier, when he became ISNA’s leadership development director, providing Muslim chaplains the religious endorsement they need to work in the military and prison system.

He is one of seven lecturers in the Army’s Islamic education program, overseen by the Naval Postgraduate School in Monterey, Calif. Much of the work is contracted out to Huntsville, Ala.-based Camber Corp., the privately held firm that hired Safi.

The training on Islam is part of a broader military educational program for which Camber is paid about $17.7 million annually, Navy Commander Brenda Malone said. Camber spokeswoman Rivka Tadjer declined to comment, citing instruction from the military.

One lecturer not affiliated with Camber who has worked alongside Safi is Michael Rubin, resident scholar at the conservative American Enterprise Institute in Washington, D.C., and a staunch ally of Israel.

Safi’s presentations stick to religious theory and do little to prepare deploying soldiers for how extremists exploit Islam, said Rubin, an Iran expert who also lectures at the naval school. “There’s an element of excusing rather than explaining,” Rubin told The News.

Military officials would not identify the five other trainers. They said federal privacy law forbids naming the subcontractors without their consent, which they did not give.

One trainer who has previously identified himself publicly is Yahya Hendi, a chaplain at the National Naval Medical Center near Washington. He serves with Safi on ISNA’s chaplaincy board and sits on the ISNA-affiliated Fiqh Council of North America, which issues Islamic legal decrees. He did not respond to repeated requests for an interview.

Investigators came across Safi at least 15 years ago during a government investigation into terrorism financing. Later, after he began working at ISNA, the group was named an unindicted co-conspirator in the prosecution of Richardson-based Holy Land Foundation for Relief and Development. It was the government’s largest terrorism financing case and ended in 2008 with convictions against senior Holy Land leaders.

“He has not been the subject of any indictment,” Fort Hood spokesman Tyler Broadway told The News in a Dec. 9 e-mail. “His presentations have always [met] the high standards expected.”

In January, military officials told the newspaper that Safi was under investigation and that his lectures had been suspended. The investigation, begun by the Naval Criminal Investigative Service, was recently referred to the Army, said Ed Buice, an NCIS spokesman. He would not elaborate, but other military officials said the inquiry began after a Dec. 3 complaint about ISNA. The complaint came in as Safi concluded three days of lectures at Fort Hood, which is still traumatized by the Nov. 5 massacre.

Thirteen members of Congress, all conservative Republicans, wrote to Defense Secretary Robert Gates on Dec. 17 asking him to halt military base lectures by anyone affiliated with ISNA. Gates did not respond, said Rep. Sue Myrick of North Carolina.

Myrick, who founded the congressional Anti-Terrorism Caucus, co-signed a similar letter during the Bush administration, asking the Justice Department not to co-sponsor an ISNA event. There was no response then, either.

“We never get an explanation for the strategy,” she said. “They just ignore us.”

Even counterterrorism experts differ on what the government’s strategy should be and how much nuance is necessary for success.

Paul Pillar, a retired CIA expert on terrorism and the Middle East, said The News’ findings illustrate “how hard it is to come up with some person or organization that is Muslim in North America that does not have some kind of associations or links that when we looked into them we’d say, ‘Oops, that gives us pause.’ ”

Not everyone with such associations is “unsavory,” Pillar stressed. He said he was unfamiliar with Safi and ISNA.

“You can’t not have contact with them,” he said of ISNA, but “keep them at arm’s length.” Do not involve them in military and law-enforcement training, he added.

The Pentagon has acknowledged that not enough attention was paid to the warning signs evidenced by Hasan’s rhetoric and connections before the shooting. Hasan, an Army psychiatrist, is accused of murdering 13 people and is awaiting a military trial.

“It is clear that as a department we have not done enough to adapt to the evolving internal security threat,” the defense secretary said Jan. 15 in presenting an investigative report on the Fort Hood violence.

The report did not examine policies concerning contractors, but its authors said, “We strongly recommend that they be addressed in a future review.” They also warned that military standards for those who certify chaplains may be too lax and allow “improper influence by individuals with a propensity toward violence.”

Defense officials would not say whether the recommendation and warning related to Safi and ISNA. They were not named in the “Lessons from Fort Hood” report.