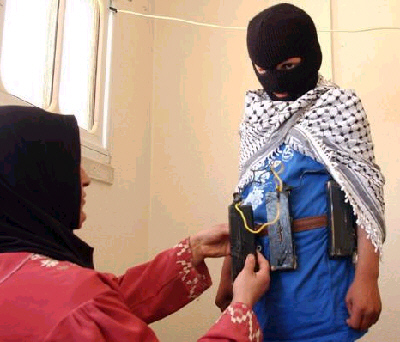 Thankfully we have seen that non-Muslims in the UK, have started to take a stand against Islam. Unfortunately though the war with Islam is forever, and here is another reminder for us. As I have been saying, all non-Islamic countries need to end Muslim immigration, because they will never stop pushing.
Related video: “Palestinian TV Teaching Kids to Kill in the Name of Islam~Video”.

Counter-terrorism police say their discovery of a film of children being encouraged to hold guns is evidence of attempts to radicalise youngsters.

The Counter Terrorist Unit (CTU) in North West England revealed they found the film during a raid in Manchester.

Officers say it shows two children, aged about three and six, playing with a pistol and a Kalashnikov rifle.

Material seized separately included the advice: “No child is ever too young to be started off on Jihad training.”

The footage, which police believe was filmed in Pakistan, was uncovered on the hard drive of a computer during a raid carried out under the Terrorism Act 2000. Police have not revealed when the material was seized.

Police believe the firearms are real.

The video shows a girl and young boy playing with guns and a man’s voice says: “What do you do with the weapon?”

He answers his own question: “I want to kill the infidels [non-believers].”

A senior officer in the CTU, who cannot be identified for security reasons, said: “We believe this was filmed abroad.

“We have no idea who the children are. We were shocked to find it at the house. We have no reason to believe this is faked. The guns are real.”

Police say they have also found flash cards, used to teach young children the alphabet, in another house raid.

The officer said: “We found a series of flash cards and documents on how to raise Mujahid children [who will fight for Islam]. The cards were written in English – and instead of having M for Muhammad they had M for Mujahideen…”

“They have the potential to indoctrinate. It just shows the mindset of some people and what we are up against.”

The documents say: “The key is to start instilling these values in them while they are babies. Don’t wait until they are seven. No child is ever too young to be started off on Jihad training.”

He said: “My view is [that] the majority of the community across the board see the threat that we’re dealing with and are hugely supportive.”

If your view is correct, how come the UK’s Islamic community is basically silent on this issue?

Link to Article and Video