NYC Hotel Disgraces all Those who Suffered on 911. 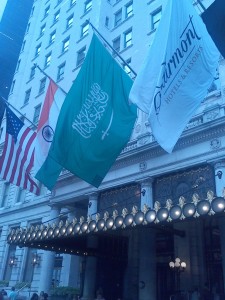 The other day I was taking a walk near Central Park’s 5 star Plaza Hotel. The streets were full as it was a beautiful sunny day. Freedom was in the air! Then unfortunately I was hit with a reminder of what so many of us are fighting to keep these simple freedoms.

As I crossed the street I had noticed the sword of Islam being proudly displayed center stage above the doorway of the hotel.

On the flag is the shahada. The testimony one recites into order to become a Muslim. Considering it is the flag of Saudi Arabia, I would have to say that some Saudis owned a good chunk of the hotel. But my question is, did even one of their partners there wonder what the flag with a sword on it actually stood for?

For the record: This is not the first time the sword of Islam has been displayed in a high traffic area of Manhattan. It is also being displayed at Rockefeller Center. So I merged the two videos.

HOW DARE THEY GET AWAY WITH THIS ????? SHARED AND CALLING WITH PROTEST. Are you sure this is True. I’m dumbfounded.

Yes, I took the picture an video myself. If you speak to them please let us know what they said.

Have a good weekend!

I called them up Chris and (respectfully) gave them a piece of my mind. Finally she asked if I’d like to talk to the manager and yes I would but after a looonng wait I finally hung up. But they got the message and yes I mentioned LW. We have to speak out. This infuriates me.

Awesome Tommy! The certainly got an earful. Thank you!

I called this morning and talked to Charlene (?), who said (after a long wait) that the flag in question is not flying, and that the usual four flags that do fly are: U.S., Canada, the hotel flag and one other (can’t remember, but not the S.A.). She explained that when they have a VIP stay at the hotel, they fly his/her country’s flag. When I asked whether a Saudi had stayed recently, she replied in the affirmative. Wish I could go into NYC today and check it out! Anyhow, I quickly schooled her in some important points on Islam.

Interesting. I will definitely pass by within the next few days, and let you know. I appreciate the call!

Chris thanks for bringing this to my attention and about this Abomination of a ‘Flag’. I was able to get some good photos of it this morning. ALL who read this, TAKE some ACTION and stand up to this dark evil, this black plague, Islamic Fascism, which spreading here in America and abroad.

So it WAS flying the morning of July 19th? Then the woman who took my call lied to me!

On this ‘Flag’ which is the flag of SAUDI ARABIA in the green field with a large white Arabic script is the Shahada or Muslim (Islamic) creed (statement: lā ʾilāha ʾil ʾāllāh, muḥammadun rasūlu-llāh (translated as “There is no god but God and Muhammad is the Messenger of God”)

The sword is the tool that was used to spread Islam (violence, hatred, blood, and persecution along with it).Islam in Arabic means submission; submission to the sword under the fear of being killed.

Also why the hell is the Indian flag flying there?