The next three articles I will be posting are Christian based articles. The first is from our friends at Rapture Forums, which clearly ties in with my “Is Islam the Mark of the Beast?” article. The second is from our friends of the United West, and by then hopefully I will have the OK to post my segment on the Salem Radio Network! Let’s get started!

The Ingredients of Islam

In order to examine Islam one should take a look at the essential “ingredients” that make up Islam. While browsing through the Internet I came across an illustration that in my mind summarized exactly what makes up this evil and wickedness that is known around the world as Islam. 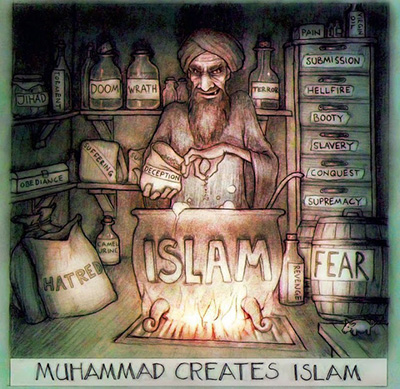 As we can see from the above image it is important to note that Islam is a complex “brew” of many different parts of evil and wickedness. While Islam was “founded” by Mohammed in the 600AD timeframe, the fact is that all the different aspects of Islam were around long before this “religion” was cooked up into its modern form. The ultimate “cook” behind the recipe of Islam will not be a surprise.

Before getting into the “ingredients” of Islam, let us look at the two major players in the development of Islam. These two players are Satan (Master Chef) and Mohammed (Cook). As the Bible tells us Satan is the “father of all lies” and this is very apparent with the development of Islam. As many scholars attest, Mohammed was not smart enough nor did he read or write well enough to put together Islam. No, the fact is Mohammed had some help, in fact, we could say he had a lot of help. But just who helped Mohammed come up with Islam? Why none other than Satan himself.

Many Islamic websites report that Mohammed was given several dreams and visions in which he was “given” the message of Islam. These dreams and visions were nothing more than the invention of Islam to act as a “counterfeit” to Judaism and Christianity. Satan needed a way to control the masses and did not like the way that God was winning souls and people with the Gospel message. Satan, being the clever and sneaky devil that he is, decided to resort to his normal tactic of “imitating” whatever it is that God as done. Thus, Islam enters the world stage around the 600AD timeframe.

Being that Satan is a supernatural being and one that does not interact with people in a physical way on Earth, Satan needed a “cook” to whip up and serve his latest invention to steal souls from Heaven and try to interrupt God’s plan for mankind. For this, Mohammed enters the kitchen of world history.

Mohammed of the Arabian peninsula was a very evil man. This is a man who raped, killed, and carried out a continuous campaign of war to dominate the areas in which he lived. When Satan looked around for his “founder” of Islam, he saw Mohammed as an “ideal” man for his new evil and wicked religion. To make a long story short, Satan provided the inspiration behind Islam and Mohammed was simply his “cook” used to put together his cleverly designed plan to try to defeat God’s plan for mankind.

Mohammed found a way to blend many different types of evil into one great recipe that has been a source of terror and bondage for mankind for over 1,400 years.

The kitchen is nothing more than the place where a recipe is put together. In this case with Islam, the kitchen is none other than the “pit of Hell” where Satan develops all his evil schemes.

When looking at the image above, we can immediately see Mohammed busy at work putting toether the recipe of Islam. Let’s take a look at some of the ingredients that we know of about Islam.

1. Hatred – Islam is full of hatred. The primary targets of hatred is that of mankind. This is especially true for two groups of people on the Earth that are known as the “people of the Book” which refers to Jews and Christians. No one but Jews and Christians are targeted by name in Islam. This is probably because Jews and Christians are the two groups of people in the world that have the light of the Word, the rest are in darkness and are being led down the wide path of destruction. Satan is not worried about these other people, they will be his in the end.

2. Obedience – Islam demands nothing but strict obedience to its followers. Even minor infractions such as stealing and adultery can lead to stoning or loss of life. Islam demands obedience and those who disobey are forced to withstand wicked punishments.

3. Suffering – Suffering is a common theme in Islam. Women are made to suffer physical and emotional acts of violence ranging from rape, loss of educational opportunities, etc. Many people in Islamic countries are suffering from lack of food, medicines, money, etc. due to the stranglehold of Islamic traditions.

5. Torment – Islam is notorious for tormenting people who do not submit or follow its teachings. Torture and dismembering of people of different faiths is common in Islamic lands.

6. Doom and Wrath – The wrath of Islam falls on those who do not believe the same as those in Islamic countries. Islam does not play well with others and in many places of the world where Islam has taken root Doom and Wrath from the fanatical believers of Islam is sure to follow.

7. Deception – Islam is a “counterfeit” religion developed to try to disrupt God’s redemption plan for mankind. Whereas Christianity leads people to the Gospel message of salvation and eternal life, Islam masquerades as a legitimate means of redemption. However, through deception Islam has led many down the wide path of destruction for not following the Good News of Jesus Christ.

8. Terror – One of Islam’s many ways in getting people to “submit” to it is by terrorizing people and we can see that in today’s world by the numerous “terrorist” attacks which are disproportionately committed by followers of Islam. It doesn’t take a genius to know that whenever a “terror” attack has occurred somewhere in the world, Islam will not be far behind it.

9. Pain – Islam is notorious for inflicting pain on both its followers and its enemies. Pain is a constant theme in Islam as Satan tries to inflict pain upon men since he had been trying to destroy us ever since the Garden of Eden.

10. Submission – Islam seeks to have people “submit” to its authority and teachings which are perverse and destructive to those who follow them. Satan wants people to submit to him rather than submitting to the Almighty God.

11. Hellfire – one sure thing is guaranteed for followers of Islam and that is Hellfire. Those who do not accept the one and only way to Heaven through Jesus Christ are assure an eternity of Hellfire when they are thrown into the Lake of Fire at the end of the age.

13. Revenge – One of the occurring themes of Islam is revenge, for example, whenever a land is conquered for Islam it is taught that that land should always belong to Islam. It is the duty of every Islamic to fight until lands once controlled are back into the hands of the Islamic hordes.

14. Fear – people caught in Islam or those who are forced into Islam live in constant Fear of those who are radicals of this evil and wicked religion. Fear is a controlling ingredient in the success of Islam.

After going over many of the main ingredients of Islam, it is appropriate to issue a final warning at the end of this article. There are many different flavors and appearances of Islam, some are mild and inviting, whereas some are overbearing and upsetting to the stomach.

It is my prayer that people will stop and ask “What is in Islam?” before they embrace it. Too many people have fallen victim to Islam and are now laying up in a spiritual hospital from food poisoning. If you are hungry for spiritual food and proper nutrition, I advise a healthy dose of Christianity whereby the bread of Life will sustain you for eternity.

Please pay our friends a visit at Rapture Forums.

very well written and easy to understand…. shared on my fb site.
thanks for the great insight and info!!!

The Ingredients of Islam - 'Nox & Friends

Author
admin
Reply to  The Ingredients of Islam - 'Nox & Friends

Thanks for posting this!

Clear and concise analysis derived from literally MOUNTAINS of factual evidence found all – over – the – world, available not only buy direct observation… but also as provided in their own written documents.