When it comes to Treacherous Tommy, things are getting worse by the day. Today his treachery took another step forward, as he showed some “love” for the Muslim Defence League (MDL), an organization that was created to counter the English Defence League (EDL),

Tonight on Twitter, Tommy showed some support for the MDL by reTweeting the hate-filled Islamic organization.(For the record, the comment about Mo was originally from Robinson.)
(Click on image to enlarge) 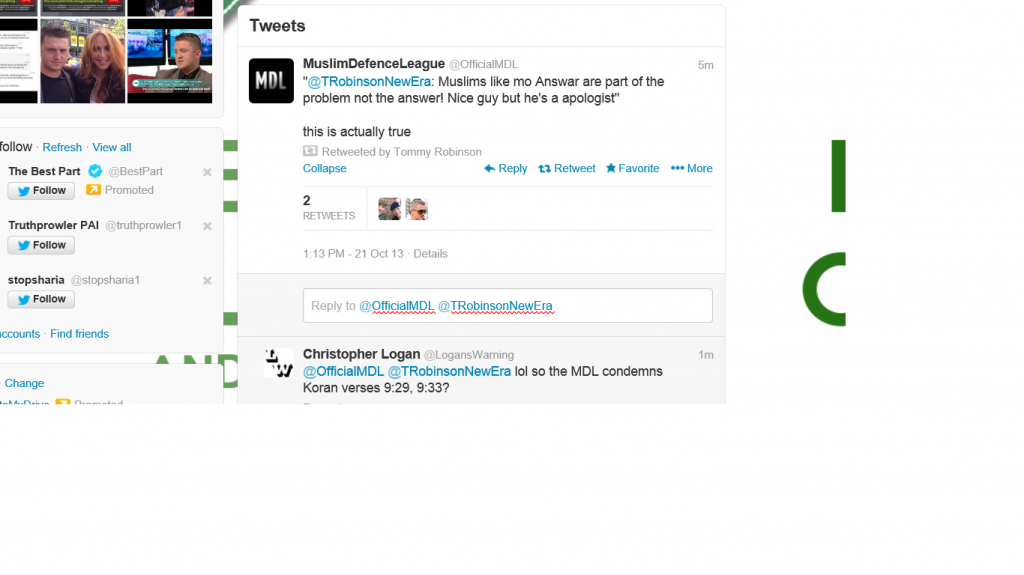 For those who do not know, the MDL is an …err…gang that is willing to shed the blood of EDL members in the name of Islam.

Not only is Tommy cozying up to Muslims, he is sending a convoluted message. Is he implying the MDL is part of the solution and stands against Islamic rule? Because after reading the following comments from their Facebook page, I find that hard to believe.

Muhammad Rafiq Islam: Zionists will be defeated, that day is getting near to us Muslims to pick up a gun and blast these Zionist kuffar of the face of the planet infact it has started but we need the ummah to stand 2gether! Inshallah

Muslim Defence League (MDL): In times like this unity is needed!

Muhammad Rafiq Islam: U can say that but in east London itself it has most probably over 15 different type ov Muslims. The qur’an says to be a Muslim not a Sunni or a Shia or a Sufi! People need to go back to the qur’an before making a name up what is better than calling ourselves Muslims? Nothing we need to put our differences aside and follow the qur’an and sunnah. People are to in love with this life. Salaam

Muslim Defence League (MDL): This is why unity is needed..

Muhammad Rafiq Islam: But we really do need to unite.

Muhammad Rafiq Islam: May Allah swt guide all to the right path and be united ameen.

Muhammad Rafiq Islam: Khilafa is coming to England soon. Ameen and as for those so called area code gangsters will be awaken inshallah and join the force of the Islamic state and be correcting there deen. I hope I just see this day inshallah and see the English defence poops in horror lmao.

Muhammad Rafiq Islam: Not only Engl and but the entire world!

Beside the above, the MDL stands against freedom of speech and had threatened to sue me in the past.

To make matters more confusing Tommy is now speaking out against Mo Ansar, but according to an article on Bare Naked Islam, he actually praised Mo, the wanna-be Mohammad.

Three hours of debate followed. Tommy meanwhile seemed to enjoy ordering the most expensive thing on the menu. He liked his steak on the rare side. At the end of it we both tweeted two statements from Tommy – that I “must be reading a different Qur’an to everyone else” and “if every Muslim was like you there would be no problem”. The response was shocked and sceptical. That I had passed the Tommy Robinson test for acceptability was nothing to be pleased about. He had to meet more people. We needed to do more work.

Now I know Mo could be lying, and I do not trust him at all. But because of the recent actions of Robinson, he has placed himself in a position of distrust as well. Tommy and Mo, two untrustworthy peas in a pod….

← Tommy Robinson’s Defection from the EDL has Lead to…
Another Muslim Traitor to America Exposed! →