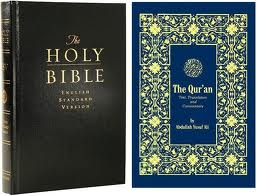 Instead of standing up for Christianity, a Utah Church is handing out free Korans in disgraceful display for Easter Sunday. Unfortunately there is a clear pattern of so called “Christians” across the world bowing to Islam. Have they ever wondered why the Islamic community has been persecuting Christians for centuries? Appeasement is weakness, which is something Muslims will exploit over and over !

(Reuters) – A Utah church is giving away free copies of the Koran in an Easter season ecumenical riposte to the recent burning of the Islamic holy book by a controversial Florida pastor.

The Wasatch Presbyterian Church has ordered 50 copies of the Koran to be distributed at a local bookstore starting on Monday.

“We’re not promoting Islam, we’re not saying the Koran is the Bible,” said Scott Dalgarno, the church’s pastor. “We’re just saying that if people are curious, if they want their consciences informed on this issue … then let them pick up a copy on us and read it and decide for themselves what to think.”

You sure are promoting Islam, because you do not have it in you to condemn a religion/ideology that is hellbent on destroying yours.

Dalgarno says each Koran, which the world’s nearly 1.6 billion Muslims believe is God’s final testament, will have a bookmark insert that reads: “This book was donated by the leaders of Wasatch Presbyterian Church who are not afraid of truth wherever it can be found.”

He said the giveaway was a response to Terry Jones, the leader of a fringe, fundamentalist church in Gainesville, Florida.

The response should have been for the Church to stand up for freedom of expression!

In a move that prompted riots in Afghanistan, Jones’ tiny church in northern Florida burned a Koran last month following a mock “trial” of the text.

“When we found out that Terry Jones had actually carried through on this and 20-plus people had died as a result we thought we can’t stay silent here,” said Dalgarno.

I see, you can express yourself, but Pastor Jones cannot because he “offended” Muslims. Bow to Islam, and feel that boot heel on your neck. Because that is what you are others like you are inviting …..

The contact information for the “Church” can be found HERE. Please shower them with some “Logan love”.

← ~Muslims Manipulate The Minds Of Our Youth!~
Islamic Victory in Michigan ~ Pastor Jones Barred From Going NEAR Mosque! →