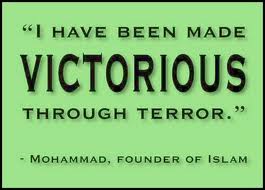 Yesterday I put up a post entitled “Lead Story On RevolutionMuslim.com is Article From Logans Warning”. Last night I checked the comment section on Revolution Muslim, and saw this.

Terrorism commanded by Allah and terrorism dispraised by Allah such as thos acts carried out by the American B52 Bombers to force democracy down the throats of Muslims.

Quran 8:60 : And make ready against them all you can of power, including steeds of war (tanks, planes, missiles, artillery) to terrorize the enemy of Allâh and your enemy, and others besides whom, you may not know but whom Allâh does know. And whatever you shall spend in the Cause of Allâh shall be repaid unto you, and you shall not be treated unjustly.

About Me
The main objective of The Call2Islam Movement is to please Allah (SWT) by calling the society to Islam and by commanding the good and forbidding the evil. And Allah says in the Quran: ‘And let there arise from among you a group calling to all that is good and forbidding what is evil. It is they who are the successful’ [3: 104]

Favorite Music
“And of mankind is he who purchases idle talks (i.e.music singing etc.) to mislead (men) from the Path of Allâh without knowledge and takes it (the Path of Allâh the Verses of the Qur’ân) by way of mockery. For such there will be a humiliating torment (in the Hell-fire). “(EMQ 31:6)
Favorite Books
Qur’an

Abu is one of the leaders of the the UK’s Call2Islam group, and he also reposted my call to end all Muslim immigration. There is nothing better than making friends across the world…

To Islamic excuse makers that visit here. Don’t bother saying that the verse is misinterpreted, unless you can prove it. Islam is a religion that breeds terrorism.