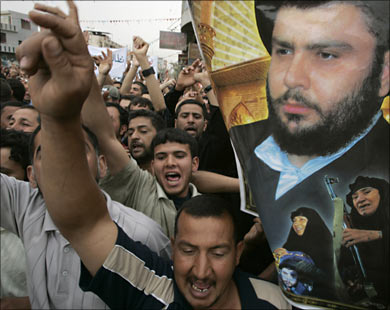 When it comes to “nation building”, I have stated over and over, that the infidel does not get to dictate to Muslims what Islam is. This is not a knock at our great troops, it is just that they warriors, and not magicians. The centuries long Shiite vs. Sunni feud, will also not change because we want it to. Besides the Shiite vs. Sunni problem, Iraq has also become a Christian persecuting country, and things will get worse when the troops leave. It is time to face the reality that the Western world is not going to transform the Islamic world. We must now protect ourselves here at home, and contain Islam. To do this we need to end all financial aid to Islamic countries, end their immigration, and officially ban Sharia Law. If any Muslim then calls for Sharia, they are to be arrested, and deported if possible. All Sharia loving Muslims, are to be looked upon as enemies of the state. Just as Nazis were.

BAGHDAD – An influential anti-American Shiite cleric called on his followers to defend themselves and places of worship after deadly Baghdad mosque bombings but urged self-restraint to avoid giving the U.S. military an excuse for postponing withdrawal plans.

statement signaled growing impatience among Shiites over continued bombings by insurgents and the government’s failure to protect them.

Friday’s bombings — most targeting Shiite places of worship as crowds were at prayer — killed 72 people in Iraq’s bloodiest day so far this year in an apparent backlash by the Sunni-led insurgency after the slaying of the top two al-Qaida leaders last weekend.

Nobody claimed responsibility for the attacks, but Iraqi officials were quick to blame al-Qaida in Iraq, which frequently targets Shiite mosques and processions in a bid to stoke new sectarian bloodshed. Prime Minister Nouri al-Maliki said the insurgents were fighting back after the deaths of their two leaders.

Al-Sadr, whose forces have frequently clashed with the Americans, issued a statement late Friday calling on “believers” to join the Iraqi army and police “to defend their shrines, mosques, prayers, markets, houses and their towns.”

He stopped short of mentioning the Mahdi Army, his once-powerful militia, which used to respond to such attacks with raids on Sunni areas. Several advisers said al-Sadr was offering his assistance to the government in a rare show of magnanimity to al-Maliki.

The two men were once allies but became rivals after al-Maliki backed U.S.-Iraqi offensives in 2008 that crushed al-Sadr’s fighters and forced him to declare a series of cease-fires.

The cleric, who is widely believed to be based in Iran, has re-emerged as a prominent politician and a potential kingmaker after his followers fared well in the inconclusive March 7 parliamentary vote. That left al-Maliki and his secular rival Ayad Allawi jockeying for allies to give them the necessary majority support to govern.

The protracted political wrangling has raised fears of sectarian violence akin to that seen at the height of the war. U.S. and Iraqi officials have acknowledged that insurgents maintain the ability to stage high-profile bombings while noting the Shiites have not resumed retaliatory attacks.

A Sadrist who won a seat in the new parliament, Hakim al-Zamili, emphasized that al-Sadr’s statement was not meant to supplant the Iraqi military or put armed supporters on the streets.

Al-Sadr urged Iraqi leaders “not to be pulled toward the malicious American plans that intend to pull Iraq into wars and fighting in order to find the pretext for staying on our holy lands.” He appeared to be appealing for a renewed commitment, despite continued violence, to stick to a deadline for all U.S. forces to withdraw from Iraq by the end of 2011.

Al-Zamili — himself once imprisoned for alleged links to Shiite death squads although the charges were eventually dropped — said he and other Sadrists had to intervene when the Iraqi military arrived on the bomb scene Friday because people in the neighborhood were so angry that he feared a serious altercation between residents and military personnel.

Weeping and wailing crowds marched in funeral processions Saturday in the vast eastern Baghdad slum of Sadr City, where the worst of Friday’s violence occurred, and Shiite leaders called for three days of mourning. Women in black cloaks comforted crying boys, and anguished men held posters of clerical leaders as they marched.

Al-Sadr’s office erected a large mourning tent close to where the bombs exploded, with prayer mats still stained with blood left on the street. Few Iraqi security forces were deployed. Persistent violence has cast doubt on the government’s ability to secure the country as U.S. forces pull back.

“The government, I hold the government responsible,” said Najim Abdul-Hussein, who works near one Sadr City blast site. “There is no stability. That’s why these attacks are increasing.”

← US: Muslim “Discrimination” Lawsuits on the Rise~ Video
Obama to Beam Message to Irish Muslim Entrepreneurs →