The beat goes on is the proper term for the arrest of this Muslim singer. The continued beat is that of the threat of Islam in America getting stronger and stronger. 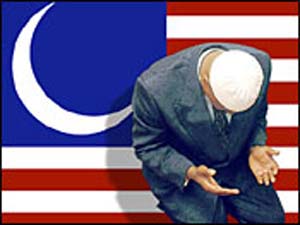 BY NIRAJ WARIKOO AND CECIL ANGEL

A Farmington Hills man arrested last week for alleged ties to a Hamas-linked charity is a well-known singer in the Muslim world.

Mohamad Mustapha Ali Masfaka, 47, often known as Abu Ratib, sings frequently to Muslim and Arab audiences in the U.S., Europe, and the Middle East, his attorney Doraid Elder said today. Local Muslims say that Ratib is well known for his singing, especially for Islamic religious songs known as nasheed. He is to be arraigned today in Detroit.

Born in Syria, Ratib was arrested by federal agents last week. An indictment was unsealed Friday that charges him with attempted naturalization fraud, making false statements to FBI investigators and immigration officials, and perjury. Federal officials say he misled investigators who were probing the Holy Land Foundation for Relief and Development, a Muslim charity based in Texas that was convicted in 2008 of helping to fund Hamas.

The U.S. government contends that Ratib sang at Holy Land events and received a check from the charity for his help. They also say he referenced Hamas in some of his performances.

According to federal investigators, Masfaka was employed by Holy Land Foundation for Relief and Development in 1997 and 1998 and ran the group’s operations in the Detroit area including organizing and participating in fund-raising events.

The group gave money to the Islamic Resistance Movement, known as Hamas, investigators said. The U.S. government considers it a terrorist group.

In 2002, Masfaka failed to mention his employment with the Holy Land Foundation in an application for naturalization with the Immigration and Naturalization Service.

In 2003, he told FBI agents he only worked for the group as a singer for fund-raising events but never received compensation.

However, investigators uncovered cashed checks showing that Masfaka’s role was more extensive than he admitted and that he had been paid for his work.

Masfaka was arrested by U.S. Customs and Border Protection when he attempted to reenter the United States from Canada via the Ambassador Bridge.

But his attorney, Elder, said that Ratib did not lie to investigators and was open with them about his singing at Holy Land fund-raisers.

“He was as cooperative as he could be,” Elder said.

Elder said he doesn’t know what Ratib sang about exactly, but regardless, he said that Ratib’s singing is free speech and protected under the First Amendment.

Ratib has been written about in Muslim publications. In an April 2006 article in IslamOnline.net, Ratib is described as a Muslim singer who uses his “talent to promote the tolerant message of Islam and tune down the noise of misconceptions and stereotypes.”

Ratib is quoted as saying, “Religious songs have become the best tool to serve our faith.”

The negative image of Islam after the Sept. 11 attacks, he said, “makes it incumbent upon us Muslims to craft out new ideas and tools to introduce the merciful, tolerant teachings of our religion.”

Ratib, lets take a look at the Hamas Charter and see just how tolerant Islam is.

← Dutch Protest for Geert Wilders~ Video
Muslim Commenter: “Those who insulted Islam in the Netherlands must die.” →