Last month, authorities detained a senior prince, Khaled bin Talal, for opposing the government’s reforms such as the decision to curb the power of the religious police, according to people familiar with the matter.

“He was complaining about the reforms. He thought that would give him [political] credibility,” said a person briefed on the event. The prince, who has limited political clout, is kept at the high-security prison of al-Ha’ir.

Since the clampdown, many clerics have publicly endorsed the social reforms, while others have kept silent. “They are government decisions and it is part of our religion to accept that,” said Sheikh Mohammed al-Hodithy, 87, who until his retirement was the chief justice in Asir region.

The government is also setting up a new center to vet the interpretations of Prophet Muhammad’s teachings, or hadiths, in a bid to prevent the teachings from being used to justify violence.

Sure, it sounds nice, but when it comes to trusting Muslims we need to look beyond the surface. Since PJ Media/InstaPunit did not bother to take the time to do so, I will. The key word there is “hadiths“. Adding it to the glaring omission of that there is no mention whatsoever of the Koran. Which means that they are implying that the Koran is no threat to non-Muslims. So for this article I will go Koran only in order to expose its calls to violence.

As you see that is a call to slay non-Muslims because they have left Islam.

Indeed, the penalty for those who wage war against Allah and His Messenger and strive upon earth [to cause] corruption is none but that they be killed or crucified or that their hands and feet be cut off from opposite sides or that they be exiled from the land. That is for them a disgrace in this world; and for them in the Hereafter is a great punishment,

You might be saying to yourself that the verse is talking about self-defense in a physical war. So what is the problem? The problem is the definition of “waging war” against Allah under Islam.

The recompense of those who wage war against Allah and His Messenger and do mischief in the land is only that they shall be killed or crucified or their hands and their feet be cut off on the opposite sides, or be exiled from the land.) `Wage war’ mentioned here means, oppose and contradict, and it includes disbelief, blocking roads and spreading fear in the fairways.

Unfortunately simply opposing Allah, and being a non-Muslim is considered to be “waging war” against Islam.

Did the latest Muslim “savior” of the West miss those calls to violence? Of course not. He is just practicing kitman. Lying by omission.

“It will purify Islam from any inventions, clean the hadiths from the liars’ deliberate misquotations and present Islam in a better image,” said Sheikh Mohammed bin Hassan al-Sheikh, the chairman of the new entity and a member of the Council of Senior Scholars, the kingdom’s highest religious body.

Whitewashing Islam is what this is all about. While that may work with PJMedia/Instapundit, it fails here at Logan’s Warning. Because only the absolute truth on Islam will save our future generations from the shackles of Islam. 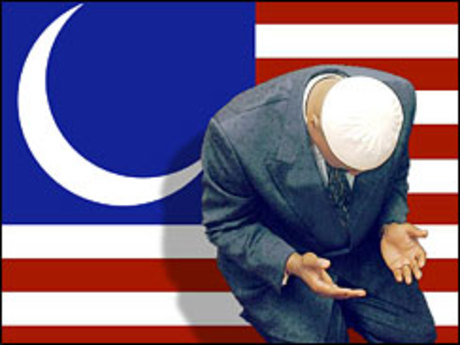 ← Clarion & Apostate Ali: Give us More Money so we can Further Mislead the Public
Facebook Frauds! →

1 comment for “Saudi’s Attempt to Whitewash Islam ~ When Will the West Wake up?”