Searching online tonight I found another article which shows us that Muslim organizations are hellbent on convincing Christians, Jews, and governmental officials that Islam is a harmless religion/ideology. That is no threat at all to other religions or the U.S. Constitution. 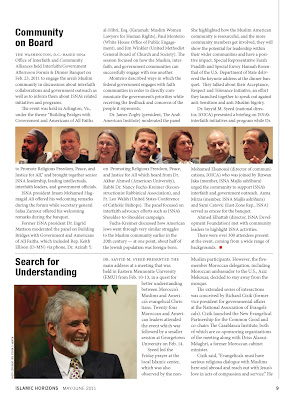 This past February 23rd, the Islamic Society of North America’s (ISNA) Office of Interfaith and Community Alliances held an Interfaith/Government Forum and Banquet.

Monteiro serves as the liaison to Arab Americans, faith-based and secular belief communities and also assists in coordinating the White House Mentorship Program. He worked for then-Senator Obama in his Senate office in 2006 before joining the Obama for America campaign in Chicago as the national Deputy Director of Religious Affairs.

Did Mr. Monteiro not know about the ISNA, or did he just not care? Because if he would have done his homework, he would have known the following:

If the ISNA was secular they would not have had past speakers such as Keith Ellison, CAIR’s Ibrahim Hooper, and Brooklyn NY’s hate-filled Imam Siraj Wahhaj.

Monteiro would have also seen the following article on the ISNA’s website, which is pro-Sharia Law.

Fiqh- (i.e. Islamic Jurisprudence) is defined by Ibn-Khaldun as the classification of actions/obligations as: obligatory, encouraged, permissible, discouraged, forbidden, based on the Qur’an, the Sunnah, and the decisions of prior jurists.

The Koran and Sunnah call for the domination of non-Muslims. Are non-Muslims actually supposed to respect this? Unlike many in our government, I don’t and won’t!

The next two paragraphs clearly show us how Muslims intend to work our system from the inside, in order to get our government to suit Islam.

(60:8) Allah does not forbid you from dealing kindly and justly with those who did not fight and drive you out of your homes for your religion, For Allah loves those who are just. (60:9) Allah does however forbid you from those who fought you for your religion and drove you out of your homes and supported others against you so that you will be forced to submit, and turn to them for friendship and protection, and whoever submits to them (in these circumstances) has wronged himself.

These two verses lay the legal foundation for the relations between the Muslims and Non-Muslims, and they speak for themselves. At all times justice is obligatory on the Muslim, and kindness is also until it is used as an excuse for committing treason against Allah. Other than that we should treat everyone both Muslim and non with justice, respect, and kindness so that we will get closer to Allah and attract people to Islam. Therefore, even if a government or institution is not perfect in its Islamic practices, but does not commit open and severe oppression against the Muslims, Muslims are allowed to work within the system to try to improve it. This concept is not a new one to Fiqh because all the scholars and teachers after the end of the enlightened Caliphate and the beginning of royalty continued to teach and worked within the imperfect system to serve the greater Muslim Ummah despite the problems within the government.

Just like Hitler didn’t hide his agenda, neither do Muslims. Are you listening?!