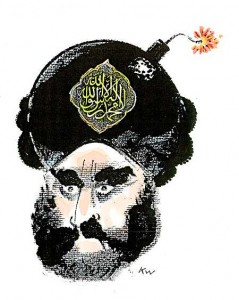 This time the protest was peaceful, but once again we see how fast Muslims rally together for their cause. We need to do the same thing and rally our people against Islam before they take over the West, just like they did the Middle East.

Oslo taxi drivers protesting against the drawing of the Muhammad cartoons

The Norwegian newspaper Dagbladet, released on Wednesday one of the illustrations on its front page.

Spontaneous demonstration was launched on Friday evening, and urged the busy men behind the wheel to park their cars during the period of two and four o’clock. According to police, the protest went peacefully.

Dagbladet used the drawings to a story, according to which the security police PST’s website has a link to the infamous cartoon images that have given rise to such bad blood. In the drivers’ view, the publication of the picture, was once again unnecessary.

– We wanted to show our opposition to it that makes a mockery of our values, “said the driver Munir Rashad.

Which “values” whould that be? Do you mean like encouraging people to lie, or how about teaching children to join the jihad? Those “values” are not wanted in the West.